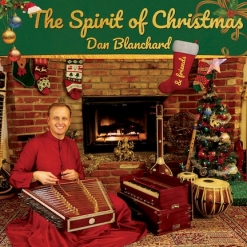 Dan's Website Dan's Artist Page on MainlyPiano
Album Links
Amazon (referral)iTunesApple Music
This site contains affiliate links to products. We may receive a commission for purchases made through these links.
The Spirit of Christmas
Dan Blanchard
2018 / Peaceful Vibes
61 minutes
Review by Kathy Parsons
Dan Blanchard’s The Spirit of Christmas is definitely one of the most unusual Christmas albums I’ve heard in recent years! Calling it a “fusion of favorite Christmas Carols and Indian Classical Music,” Blanchard and his talented musician friends have taken twelve traditional carols and arranged them for Indian instruments that include santoor, harmonium, tabla, sitar, Indian slide guitar and Bansuri flute plus violin, cello bass, keyboard and acoustic guitar. These arrangements keep the original melodies intact, so if you want to sing or hum along, you can with most of them. This is a Christmas album that provides an hour of warm, joyful holiday music sure to raise the spirits of listeners all over the world. It’s different, but not so much so to be off-putting to those with more traditional taste in Christmas music. I think more than anything, this album expresses the joy of making music as well as the spirit and generosity of the season. I really love the blending of traditions and cultures, and the world really needs this message of unity, harmony and sharing.

Dan Blanchard has been playing western instruments since childhood and was classically-trained in India on the santoor. He blends ancient Indian classical music with World and Western styles to explore the therapeutic power of music. By adapting his music for the modern world, Blanchard provides a powerful and engaging experience for overall well-being, joy, and inner peace. His first album, Awakening - Raga Bhairav, was released in 2011.

The Spirit of Christmas begins with “We Wish You a Merry Christmas,” performed on both Eastern and Western instruments plus light percussion. That segues into Beethoven’s “Ode to Joy” from his 9th Symphony. Cello and violin join the Eastern instruments in both the melody and the interludes that sound a bit more improvised. I think even old Ludwig would smile at this one! “Jingle Bells” starts out with the sound of sleigh bells and horses trotting through the snow. Santoor and flute share the melody as well as the interludes between verses. Blanchard and company really freshened this one up! “We Three Kings” is one of the carols that adapts easily to many different musical styles and genres, and this one starts out with a very “Eastern” prelude. The actual song is played on santoor with percussion and other light instrumentation. Slow, open and slightly mysterious, it’s a favorite. “Carol of the Strings” is an arrangement of “Carol of the Bells,” another highly adaptable carol. Santoor, violin and cello create a fascinating trio in this outstanding arrangement of one of my favorite carols. Sheela Bringi’s Bansuri flute is absolutely haunting on “Silent Night.” She plays the first verse as a duet with Chris Votek on cello. Blanchard takes the lead on the second verse and the interlude, and then the trio of flute, santoor and cello take the third - so peaceful! “God Rest Ye Merry Gentlemen” is another favorite carol of mine, and this arrangement is mostly santoor, percussion, and strings. Love it! The other titles are “It Came Upon the Midnight Clear,” “Hark! The Herald Angles Sing,” “Joy to the World,” “Good King Wenceslas,” and “The Twelve Days of Christmas.” This excellent Christmas collection is a real holiday treat!

The Spirit of Christmas is available from www.peacefulvibes.com, Amazon, iTunes and CD Baby.

December 4, 2018
This review has been tagged as:
Holiday AlbumsHoliday Albums: 2018Kathy's Favorites: 2018Kathy's Picks
Dan's Website Dan's Artist Page on MainlyPiano
Album Links
Amazon (referral)iTunesApple Music
This site contains affiliate links to products. We may receive a commission for purchases made through these links.
More reviews of Dan Blanchard albums 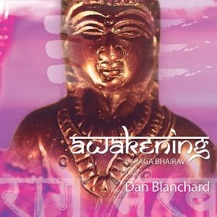