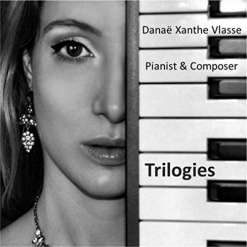 Danae's Website Danae's Artist Page on MainlyPiano
Album Links
Amazon (referral)iTunes
This site contains affiliate links to products. We may receive a commission for purchases made through these links.
Trilogies
Danae Xanthe Vlasse
2017 / Danae Xanthe Vlasse
64 minutes
Review by Kathy Parsons
Trilogies is a collection of twelve original piano solos composed and performed by award-winning composer and pianist Danae Xanthe Vlasse. As the album title suggests, there are three parts to each title/grouping: “Fantasies,” “Nocturnes,” “Petite Valses” and “Preludes.” Composed in the colorful and emotive style of the 19th century Romantics, each piece seeks to evoke or emulate a different kind of experience. Vlasse’s neo-Romantic composing has been described as “a current of old-world tension and modern angst.” Now living in Southern California, her native France and Greek heritage have important influences on her music, as do many of the classical composers. In keeping with the traditions of the Romantics, the music tells stories and expresses a wide range of emotional experiences with plenty of drama (without ever going over-the-top). Ms. Vlasse has the skill, training and heart to express whatever she chooses in her music, and does it breathtakingly well. Some of the pieces strongly suggest specific composers, but more often it’s a phrase here or there that makes me think of Chopin, Mendelssohn, Schumann or some of the other composers of piano music from that era.

Trilogies begins with “Fantasie #1 - Nuit Sans Sommeil (Night Without Sleep),” a piece that begins quietly with a slight edge but becomes more restless and turbulent, often changing themes as the brain spins from one thought to the next, evoking a variety of emotions and not allowing the body to drift off to sleep. It gets close a few times, but then flashes back to life. “Fantasie #2 - Schwanengesang (Swan Song)” beautifully expresses feelings of loss and sadness with passion and grace - a favorite. Not surprisingly, “Fantasie #3 - Elegy” is very dark and emotional, beginning mostly in the deep bass of the piano. At just over 13 minutes, this by far the longest of the compositions and quite possibly the most expressive - a gorgeous piece that needs to be heard!

Chopin was the best-known composer of Nocturnes, and there are hints of his music throughout the three Nocturnes in this collection. The emotional depth and incredible beauty of Chopin’s nocturnes are also honored with Vlasse’s graceful touch and elegant playing style. I really love all three of these pieces.

Most of the Romantics composed waltzes in a wide variety of styles, and the three “Petite Valses” on this album are on the slower, melancholy side with gentle melodies and dreamy rubato rhythms.

Preludes from the Romantic era also came in all shapes and sizes, as do the three on this album. The first has the intimacy of a conversation with someone close - very open and expressive. The second is edgier and darker, ending quietly and at peace. The third is very flowing and serene - another favorite.

I am so happy to have discovered the music of Danae Xanthe Vlasse and look forward to hearing more of it soon! Trilogies is available from Amazon, iTunes and CD Baby. Highly recommended!

November 30, 2017
This review has been tagged as:
Kathy's PicksModern Classical
Danae's Website Danae's Artist Page on MainlyPiano
Album Links
Amazon (referral)iTunes
This site contains affiliate links to products. We may receive a commission for purchases made through these links.