Darlene's Website Darlene's Artist Page on MainlyPiano
Album Links
Amazon (referral)iTunesYouTubeSampler
This site contains affiliate links to products. We may receive a commission for purchases made through these links.
Chromatones
Darlene Koldenhoven
2018 / Time Art Recordings
54 minutes
Review by Kathy Parsons
Still aglow from her Best Vocal Album of 2017 award (Zone Music Reporter) for Color Me Home (plus seventeen other awards and thirty-two nominations to date), Darlene Koldenhoven releases Chromatones, an album of all-instrumental arrangements of the music from Color Me Home. Most of the guest artists from Color Me Home appear on Chromatones, too, but this isn’t a re-release of the first album with the vocals removed. The eleven new arrangements are based on the music from the first album and have been re-titled. With Darlene at the piano and keyboards with her amazing group of nineteen guest artists, Chromatones is pure instrumental magic that is sure to lift your spirit as it soothes your soul. Also a certified sonic therapist, Darlene produced the music for maximum calming, focusing and restorative benefits. Just to clarify, this isn’t ear candy or fluff music - all of the pieces have a full, rich sound and fit as well in the foreground as they do in the background. Overflowing with warmth and grace, I think we have a winner here!

Chromatones begins with the sound of the ocean and seabirds and then segues into “Golden Dawn,” a magical piece that features Darlene on piano, Tom Boyd on oboe, Courtney Jacob on flute and Charlie Bisharat on violin. Very light and gently optimistic, it’s a great opener! “Mourning Doves” moves to cooler, more poignant tones, with Jacob and Bisharat plus Lyn Bertles supplying additional strings - gorgeous! “Red Savannah” features the inimitable Wouter Kellerman on flute, bass flute and fife along with Brent Fischer on vibes and marimba and Rocky Dawuni on percussion. Both soaring and soothing, I love this one! “Swans on the Seine” is as smooth and graceful as the title suggests and is primarily a clarinet and flute duet performed by Tom Scott and Gayle Levant respectively. The beautifully haunting “Native Bloom” is a Native American-styled piece that features John Sarantos on Native flute and Darlene on piano and keyboards as well as Native drums and shaker - also a favorite. The title track includes the talents of David Arkenstone, Ricky Kej and Vanil Veigas with a bigger, more cinematic sound that soars and sparkles. My favorite piece on the album is the velvety-smooth “Prism of Time.” Piano, flute (Jacob) and harp (Levant) combine to create a dreamscape of blissful peace - a massage for the mind. “Waltzing in Planetary Time” brings this lovely album to serene close with piano, guitars (Mike Miller), oboe and English horn (Earle Dumler), and flutes and piccolo (Joanne Lazzaro).

I fully expect Darlene Koldenhoven to be in the running for many awards and nominations for Chromatones next year! I think her tenth album is her best to date and give it an enthusiastic two-thumbs up! Chromatones is available from Amazon, iTunes and CD Baby as well as the many music streaming websites.
May 26, 2018
This review has been tagged as:
Kathy's Favorites: 2018Kathy's Picks
Darlene's Website Darlene's Artist Page on MainlyPiano
Album Links
Amazon (referral)iTunesYouTubeSampler
This site contains affiliate links to products. We may receive a commission for purchases made through these links.
More reviews of Darlene Koldenhoven albums 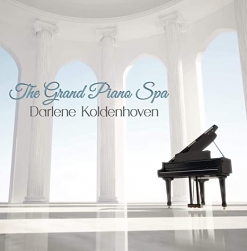