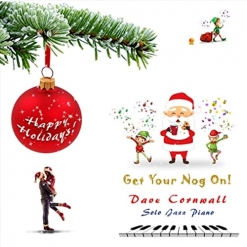 Dave's Website Dave's Artist Page on MainlyPiano
Album Links
Amazon (referral)iTunes/Apple MusicSpotify
This site contains affiliate links to products. We may receive a commission for purchases made through these links.
Get Your Nog On!
Dave Cornwall
2019 / New Friend Entertainment
34 minutes
Review by Kathy Parsons
Get Your Nog On! is a 2019 release featuring eleven solo jazz piano Christmas songs arranged and performed by Dave Cornwall, an artist whose recordings specialize in jazz piano hymns, Christmas music and patriotic songs. Cornwall has released ten albums (so far!) on the New Friend Entertainment label. This one is a collection of some of the fun and celebratory songs of the season. Overall, it’s a very lighthearted album, but a few of the eleven songs are on the more poignant, serious side.

Dave Cornwall began playing his own mix of “cocktail jazz piano” back in 1993 and has played professionally in upscale hotels, country clubs, and, more recently, retirement, nursing and rehab facilities in the metro Trenton-Philadelphia areas, providing music for a wide variety of occasions. Those experiences have taught Cornwall what music people like to hear and how they want to hear it played. A few quotes from his website: “Never ‘just’ background music… Distinctive music and entertainment that intentionally engages… that inspires…that unexpectedly surprises, and ‘renews.’”

Get Your Nog On! begins with a bluesy version of “Santa Claus Is Comin’ To Town.” Playful and full of fun, it’s a catchy starter. “Caroling, Caroling” is a bit more stately and played with a moderate waltz rhythm. “Have Yourself a Merry Little Christmas” is one of the more poignant songs and focuses on the heartfelt melody - a favorite. “Rudolph the Red Nosed Reindeer” returns to a lively jazz style that’s sure to bring a smile. This arrangement of “Deck the Halls” is on the serious, classical side - a very interesting arrangement! “My Favorite Things” lightens it up and has a fun improv between each of the verses. Wistful and dreamy, “Silver Bells” evokes thoughts of simpler times gone by. Raising the energy level a bit, “Frosty the Snowman” all but dances out of the computer/disc-player! Nostalgic and reflective, “White Christmas” touches the heart in a meaningful way. Cornwall’s is one of the jazzier arrangements I’ve heard of “Let It Snow, Let It Snow, Let It Snow” (and I’ve heard a LOT of them!). He gives “Greensleeves” a rather unusual remake with jazz chords and an irregular rhythm, but the beautiful melody never gets lost - a lovely way to end the album!

If you like traditional Christmas songs with a jazz piano flavor, this is a good one to check out. It is available from www.NewFriendEntertainment.com, Amazon, iTunes and streaming sites such as Spotify.
July 15, 2020
This review has been tagged as:
Holiday AlbumsJazzKathy's PicksLatest Reviews
Dave's Website Dave's Artist Page on MainlyPiano
Album Links
Amazon (referral)iTunes/Apple MusicSpotify
This site contains affiliate links to products. We may receive a commission for purchases made through these links.