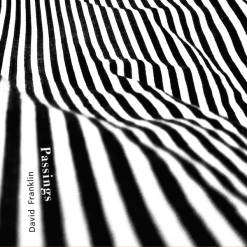 “These are 15 songs written about the many transitions and endings which have happened in my life over the past few years: the death of both my parents, my children leaving home, changes related to the pandemic, and other profound endings which I won’t mention here. These soundscapes have given me a sense of peace somehow and my hope is that they may offer something to others…”

One might assume that, considering the focus of the album, the music on Passings would overflow with grief and loss, but quite the opposite is true. Several of the pieces are reflective, but most are light and uplifting. Franklin is also a licensed psychotherapist with a practice in and around Oakland, CA and believes that music is one of humanity's most powerful tools for healing. He has spent decades exploring music in a variety of genres that include rock, folk-pop, avant-garde, and more recently, new age and instrumental music. On Passings, he performs his music on both acoustic guitars and piano plus some synth embellishments.

Passings begins with "I'll Never Hear My Father's Stories Again," a piece that is gently reflective and a little bit nostalgic, but far from mournful. Acoustic guitar, piano, and Manring's fretless bass express loving memories and then gracefully fade out at the end. "The Meeting Tree" features all three artists in a lively trio that is both joyful and celebratory - I really like this one! "We All Become Ancestors" is an ethereal piano piece that includes Manring's bass as well as atmospheric synth washes that create an otherworldly soundscape. "Laughing in Whispers," a light and breezy piano solo, demonstrates another facet of Franklin's musical artistry - a favorite! A beautifully bittersweet acoustic guitar solo, "Changes" seems to look inward for answers and understanding. "Another Perspective" is a lively acoustic guitar duet with David and his son, Alex. Bright and upbeat, it feels like a bit of musical sunshine. With one of the more intriguing titles I've seen recently, "When Shadows Were Analog" is a second piano solo. Sometimes almost buoyant and sometimes more introspective, Franklin effortlessly moves from one mood to another without confusing the ear of the listener - it's just the way life is! "Back In a Different Place" feels like a nostalgic look back at happier times. Franklin and Manring work their musical magic with some synth touches that give the piece a dreamy cast. "Dancing in Memory" is a gorgeous piano solo with atmospheric reverb effects that put the music into a slightly different realm. The last piece on the album is called "A Musical Essay" and was composed for a programmable, hand-cranked music box. The innocent melody is totally charming while the sound of the crank and other internal sounds of the music box add to the mix - a sweet ending for an excellent album!

March 29, 2022
This review has been tagged as:
Guitar musicLatest Reviews
David's Website David's Artist Page on MainlyPiano
Album Links
Amazon (referral)Apple/iTunesSpotify
This site contains affiliate links to products. We may receive a commission for purchases made through these links.