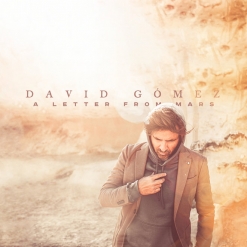 David's Website David's Artist Page on MainlyPiano Blue Spiral Records' Website Blue Spiral Records' Artist Page on MainlyPiano
Album Links
Amazon (referral)Apple/iTunesSpotify
This site contains affiliate links to products. We may receive a commission for purchases made through these links.
A Letter From Mars
David Gómez and Blue Spiral Records
2022 / Blue Spiral Records
40 minutes
Review by Kathy Parsons
A Letter From Mars is a ten-track album of original compositions by Majorcan composer/pianist David Gómez. Born in Switzerland, Gómez has had an international artistic career for more than 20 years. He gave his first concert at the age of 14 and has been touring ever since. His professional training took place at the Rotterdam Conservatory in the Netherlands, focusing on Piano, Tango for Piano, and Orchestra Conducting. As a composer, he is a passionate storyteller inspired by romantic love, life experiences and social justice. Gómez recorded A Letter From Mars at his home studio on a felted piano (where a soft cloth is placed between the strings and hammers of the piano to soften the percussive effect of the hammers hitting the strings). Some of the tracks are solo piano and others are more orchestrated. It's a fascinating album, and I'm anxious to explore more of David Gómez's music!

A Letter From Mars begins with the title track, a slow, ethereal piece that is mostly felted piano with some otherworldly ambient effects that create a pleasant feeling of moving effortlessly through space and into the unknown. "A Martian in New York" is a tragic yet elegant piano and violin duet that features Carlota Coll. Feelings of deep sadness and being hopelessly lost tug at the emotions as the violin tells its heartbreaking story. "On any planet but here" returns to piano with ambient effects that suggest deep darkness and vast open space. Sometimes almost light-hearted and sometimes more melancholy, it's an interesting mix of emotions. In "Live in Another Life," the piano plays a repeated pattern that seems to express hope. As the piece evolves, the piano seems to become wrapped in darker, more ambient sounds that suggest the unknown and hurtling through deep space. Hope remains even as the piano becomes more engulfed in darkness. "Gravity" has an almost hymn-like feeling - slow, open and pensive. In addition to the piano, there are sounds of crickets and birds as well as some electronic effects - fascinating! "Spacewoman" is fully orchestrated and is the most cinematic piece on the album. Recorded with the Budapest Symphony Orchestra, the emotions expressed in the music are filled with sadness and melancholy. One also gets a sense of floating through darkness that is occasionally lighted with stars and other planets - a gorgeous and very visual piece of music! "The Door to the Stars" feels almost magical as we venture into an area no one else has ever been before. It's really fun to imagine "Thousands of pianos floating on the moon"! Filled with a quiet sense of wonder and a peaceful kind of awe, this one makes me smile! Carlota Coll and her violin return for "Between Jupiter and Saturn," a second wonderful duet with Gómez that is enhanced with ambient effects. Mournful and deeply affecting, is it expressing loneliness, loss, profound beauty? - you get to decide! "Welcome to Nüwa" is a cello (Álvaro Peregrina) and piano duet that will touch you deeply (or should!). Shimmering atmospheric sounds bring us to a landing at the end of our journey, but is it where we want to be?

What a great album of musical storytelling! A Letter From Mars is available from Amazon, Apple Music/iTunes, and many streaming sites such as Spotify. Highly recommended!

June 4, 2022
This review has been tagged as:
Latest Reviews
David's Website David's Artist Page on MainlyPiano Blue Spiral Records' Website Blue Spiral Records' Artist Page on MainlyPiano
Album Links
Amazon (referral)Apple/iTunesSpotify
This site contains affiliate links to products. We may receive a commission for purchases made through these links.