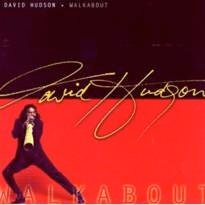 David's Website David's Artist Page on MainlyPiano
Walkabout
David Hudson
2001 / Real Music
43 minutes
Review by Kathy Parsons
Since I usually write piano reviews, Walkabout was a very enjoyable adventure for me. I was familiar with David Hudson from his work with Yanni on “Tribute”, but was not aware that he has several albums under his own name as well as with Steve Roach. Musically, didgeridoo is probably about as far from piano as you can get, but Walkabout melds many musical styles and instruments in conjunction with this primitive Australian instrument. In doing some research, I discovered that Hudson is a member of the Tjapukai tribe of Northern Queensland, and is considered to be a master of his aboriginal instrument. He also plays guitar and percussion on Walkabout, and is joined by Wayne McIntosh on guitar, Mark Mannock on keyboards, Russell Harris on Flugal horn, and Nigel Pegrum on percussion. Various rhythms are prominent, keeping the droning of the didgeridoo from becoming overbearing or monotonous for those of us entrenched in Western musical traditions.

I really like all six tracks on this CD, but my favorites are “Dream Wanderer” and “Crossroads”. “Dream Wanderer” is the least upbeat of the pieces, and is hypnotic. This piece is basically a quartet for piano, percussion, guitar and didg, which is an amazing combination! There are definite jazz elements here - especially in the piano part - but the blending of musical styles from the most basic to the most sophisticated is fascinating. “Crossroads” reminds me a little of some of Alan Parsons’ instrumental work from the ‘80’s. The shifting time signatures keep it on edge, and the rhythm is completely infectious. Piano again comes to the forefront several times with jazz/rock improvisation, but it is the percussion and growling didg that really dominate. I love this piece! Open the sunroof, turn up the volume, and let ‘er rip!

The combination of instruments and musical styles should give Walkabout a broad audience appeal. David Hudson’s creativity and willingness to blend many musical traditions and cultural styles is a step toward true “world music”. AND, it’s a lot of fun to listen to! Highly recommended!
January 1, 2001
David's Website David's Artist Page on MainlyPiano