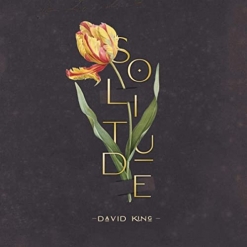 David's Website David's Artist Page on MainlyPiano
Album Links
Amazon (referral)iTunesSpotify
This site contains affiliate links to products. We may receive a commission for purchases made through these links.
Solitude
David King
2020 / David King
33 minutes
Review by Kathy Parsons
Solitude is the first solo piano album from Canadian pianist/composer David King, and what a promising first effort it is! The ten original pieces are varied in style and mood, but the album flows together beautifully as a whole. Quoting David King: “I decided to call the album Solitude as all the music was inspired either by memorable experiences in lonely places, or the thoughts and feelings stirred up when I have been by myself. Being alone can be refreshing, but at other times, challenging. I tried to capture these two sides of solitude in my compositions.” Well done! It is interesting to note that each piece was recorded in one take to reflect the energy of a live performance. The album was recorded on a C. Bechstein concert grand piano, and the sound is warm, rich and clear.

David King started piano lessons at a young age and studied classical music for many years, earning a degree in music from Western University. He released an album and an EP of pop music previously and has performed, recorded and written with a number of bands. He is now a well-respected piano teacher and church music director in Toronto in addition to being a composer and recording artist.

Solitude starts with “Awakening,” a piece that beautifully expresses the delicate colors of an early morning and the fresh promise of a new day - a great beginning! “Rushing Water,” the first single released from the album, has a powerful, swirling energy that never lets up. “Old Forest” has also been released as a single, but is quite different with its dark majesty, sense of wonder, and mysterious air. A variety of themes are seamlessly woven together to suggest the variety of life forms that dwell in an old forests well as tales of its history. “Shadows” is a favorite with its playful tempo and almost teasing sense of fun - and yet there is a touch of mystery in there, too. Love it! “Tower Ruins” has a stately classical feeling, telling the story of what went on within its walls as well as its surroundings, ending with a long, echo-y fade-out. “Dirge” is my favorite track. Very dark and slow with a powerful emotional impact, you can almost see mourners walking behind a horse-driven cart carrying a draped casket. The gently soothing “Deep Breath” provides something of a mind massage and a sweet reminder to take a moment when life becomes too much. Bright and lively, “Momentum” all but dances for joy as it twirls and leaps to its own song. “Acceptance” begins slowly, as if in deep thought. Changing themes suggest the push and pull of conflicting emotions and thoughts that go through a person’s mind before reaching a state of “acceptance” and the decision to let things be. The album comes to a close with “Morning Prayer,” a warm and peaceful expression of faith.

David King is off to a very impressive start with Solitude! The album is available from Amazon, iTunes and streaming sites like Spotify. Check it out!
September 7, 2020
This review has been tagged as:
Debut Albums
David's Website David's Artist Page on MainlyPiano
Album Links
Amazon (referral)iTunesSpotify
This site contains affiliate links to products. We may receive a commission for purchases made through these links.