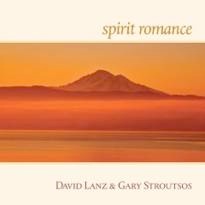 David's Website David's Artist Page on MainlyPiano Gary's Website Gary's Artist Page on MainlyPiano
Album Links
Amazon (referral)iTunes
This site contains affiliate links to products. We may receive a commission for purchases made through these links.
Spirit Romance
David Lanz and Gary Stroutsos
2005 / Narada
49 minutes
Review by Michael Debbage
One of the early pioneers of the New Age genre, David Lanz is also one of the few survivors of the declining commercial appeal of New Age music. David’s endurance is partly due his utter flexibility in being able to play hopscotch with his musical approach. This is best reflected by his last two projects the jazzy pizzazz of The Good Life and the contrasting pastoral stripped down A Cup Of Moonlight. Spirit Romance lives up to that diversity presenting the listener with a moody and musky yet improvised and intellectual collaboration with flutist Gary Stroutsos.

Apparently, this is not the first collaboration between Lanz and Stroutsos. David appeared on Gary’s Native Indian themed cd "I Am Walking" courtesy of the creation “Evening Serenada”. An improvised version is featured on "Spirit Romance" titled “Serenada”. This track sets the disposition of the entire album, only this arrangement features Gary on an ancient bamboo Chinese Xiao Flute instead of the Native Indian Courting Flute. Along with Keith Lowe on an upright bass and Glen Velez on soft percussion the album is a potpourri of peculiar mergers of jazz, classical, Native Indian and mystical eastern themes.

Additional written collaborations include “Satori” that follows right after “Evening Serenda” that has a very improvisational influence. It is also the longest track clocking in over 9 minutes that also features the atmospheric keyboard work of John Serrie. Equally as haunting is the title track that has open spaces for Lanz to flutter around gracefully on the piano. However, the limelight is left to Gary’s flute countering and complimenting the violin work of Swil Kanim. This song is simply exquisite and captures the entire essence of this album and deservedly is named the title track.

As for Lanz, at the suggestion of his producer/brother Gary Lanz, he revisited “Wings To Altair” that was previously featured on Lanz’ album Cristofori’s Dream. Renaming it “Return To Altair Suite”, the arrangement is reworked into 5 separate movements that also include the repeat appearance of John Serrie who was also featured on the original arrangement. Meanwhile, Lanz flies solo, compositionally, and transports us “Between Worlds”.

Considering the odd genre mergers, this is probably one of David’s least accessible album. In contrast, the re-envisioning of the Cuban lullaby “Oguerre”, subtitled the “Blue Largo” arrangement, is exotic and as equally accessible. Along side the title track it is one of the most memorable melodies of the album that does not require a second and third sitting to enjoy.

Granted, Spirit Romance is not an instantly gratifying album that requires some patience and undivided attention to truly enjoy this unique listening experience. However, unlike our worldly romances that are many times temperamental and short lived, Spirit Romance has a lifeline that would suggest a timeless desire for repeat visitations to your cd player.
May 5, 2005
This review has been tagged as:
Michael's Favorites: 2005
David's Website David's Artist Page on MainlyPiano Gary's Website Gary's Artist Page on MainlyPiano
Album Links
Amazon (referral)iTunes
This site contains affiliate links to products. We may receive a commission for purchases made through these links.
More reviews of David Lanz albums