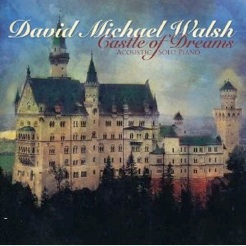 David's Website David's Artist Page on MainlyPiano
Album Links
Amazon (referral)iTunes
This site contains affiliate links to products. We may receive a commission for purchases made through these links.
Castle of Dreams
David Michael Walsh
2009 / David Michael Walsh
53 minutes
Review by Kathy Parsons
David Michael Walsh’s debut CD, Castle of Dreams, is something of a dream-come-true for the pianist/composer who composed his first piano piece in 1995. He wrote several more pieces that year and then waited for the lyrics to come. Words never arrived, and sometime later, the melodies stopped coming, too. In 2004, Walsh recorded his first seven pieces in his home studio and released them on CD Baby. As often happens when one sort of gives up on a project, the inspiration for the next nine pieces came along and Walsh was able to complete his CD in 2008, this time on an acoustic grand piano in a professional recording studio. That isn’t the end of the story, however, as Walsh conceives of this music as the basis for a ballet he would like to produce. He plans to orchestrate the piano solos and already has the storyline in place (a synopsis is in the liner notes of the CD). While the music is not complicated, it tells a very enjoyable fairy tale of lost and re-found love, and it’s easy to imagine graceful dancers expressing the story in movement.

Castle of Dreams begins with “Touch My Heart,” which sweetly describes the feelings of young love. The title track is stately yet has the softened edges of a dream. “Midnight Rain” is my favorite of the tracks. Darker and more melancholy than the previous tracks, there is some real drama and emotion here. “Conversation With Time” tells of loss and deep deep sadness. The steady rhythm in the left hand suggests the ticking of a clock while the more expressive right hand spins its tale of sorrow. “Without You” goes even darker and more despairing as the lovers are again separated. “Awakenings” is my other favorite track. Also in a minor key, it depicts the pain beginning to dissipate as the couple discovers a way to be reunited. I really like the melody, and the evenly-paced rhythm keeps the song grounded. “Forest Walk” brings us to the joyful reunion of the prince and his lady love as they begin living their lives happily ever after.

It will be fascinating to see if David Michael Walsh is able to take Castle of Dreams to its ultimate state as a staged ballet. In the meantime, we have his story to read as we listen to his music, and that’s very enjoyable, too! The music is available from Amazon, iTunes, and CD Baby. Check it out!
June 7, 2011
This review has been tagged as:
Debut Albums
David's Website David's Artist Page on MainlyPiano
Album Links
Amazon (referral)iTunes
This site contains affiliate links to products. We may receive a commission for purchases made through these links.