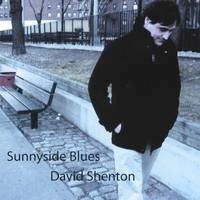 David's Website David's Artist Page on MainlyPiano
Album Links
Amazon (referral)iTunes
This site contains affiliate links to products. We may receive a commission for purchases made through these links.
Sunnyside Blues
David Shenton
2007 / Shenton Music
51 minutes
Review by Kathy Parsons
I have a little story about Sunnyside Blues that will give you an idea of how awed I am by this CD and David Shenton’s playing. I always listen to CDs a minimum of five times before writing a review, and I usually listen to them first in my wake-up CD player. When I awaken to solo piano CDs, I often drift back to sleep and dream about teaching piano lessons. That's what happened with this CD, and in my dream, the pianist was a twelve-year-old boy. His parents wanted me to become his piano teacher, and I was in an absolute panic after hearing this “kid” play!!! "What am I going to teach him????" "He’s a genius - I'm in over my head!" When I woke up and realized I had been listening to David Shenton, I had to lay there and laugh! I’ve known David Shenton for about a year as an excellent sheet music transcriber, but had never heard him play and didn’t know anything about him or his background. When this CD arrived, I started digging around on the internet and am absolutely amazed at what a consummate artist he is. (We are working on an interview, so be on the lookout for that - it is bound to be extraordinary!) Classically-trained from an early age in both piano and violin, Shenton graduated with high honors from the Royal College of Music in London. He taught himself to play jazz in the mid-90’s and came to the US in 2002, settling in New York. Since then, he has been awarded the title of “The Best Piano Player in New York City” - a very heady but well-earned title. Incredibly versatile, this guy can do anything at the piano.

Sunnyside Blues was conceived as musical tour of the western portion of Queens in New York City, where Shenton lives. The title track begins the tour with an easy pace and some really tasty piano blues. Check out the speed and clarity of those runs! Yikes - the boy can PLAY!! All of the tracks on this CD are incredibly good, but I’ll mention a few favorites. “Habanera 46” is dark, sensuous, and elegant. Reflective of the rhythm of the train pulling into the station on 46th street as well as the Hispanic influence on that area, this piece is much more classical than jazz, and what a beauty it is! My favorite track is “Feelin’ Blue on the Q32,” a piece originally written for a short film (“Beauty,” starring Joseph Melendez), adapted and extended for this album. Passionate and eloquent, this piece is absolutely haunting (we need sheet music for this one, David!!!). “The Song of Skillman Avenue” takes us to another side of Shenton’s playing - soft, gentle, and very dreamy. “The Ballad of Bliss Street” continues in this vein of quiet calm, although it intensifies a bit as it builds, again demonstrating stop-in-your-tracks playing chops that are so effortless. “Take the 7 Train” is a fascinating rhythmic study. Written in 7/8 time, it actually feels like a train hurtling down the tracks. In my sleepy first hearing of “The Rawson Street Rag,” I thought Shenton was playing a Scott Joplin rag. Instead, he has captured the joy and spirit of Joplin’s music in his own composition - great fun! “Zip Code Blues” returns us to a slinky blues piece based on the chord progressions of Shenton’s zip code!

What an incredible album to start the year with! Give your ears a treat and listen to someone who really understands the piano and all the different moods it can evoke. Sunnyside Blues is nothing short of brilliant, and I give it my highest recommendation! It is available from shentonmusic.com, cdbaby.com, and iTunes. WOW!
January 8, 2008
This review has been tagged as:
BluesKathy's Favorites: 2007
David's Website David's Artist Page on MainlyPiano
Album Links
Amazon (referral)iTunes
This site contains affiliate links to products. We may receive a commission for purchases made through these links.