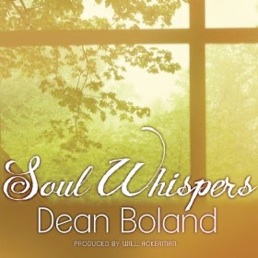 Dean's Website Dean's Artist Page on MainlyPiano
Album Links
Amazon (referral)iTunes
This site contains affiliate links to products. We may receive a commission for purchases made through these links.
Soul Whispers
Dean Boland
2011 / Dean Boland
49 minutes
Review by Kathy Parsons
Soul Whispers is the stunning debut by Canadian pianist/composer Dean Boland. Produced by Will Ackerman at his Imaginary Road Studios in Vermont, the album features several of the stellar musicians that often appear on Imaginary Road albums, beautifully enhancing Boland’s soulful and sensitive piano. The music itself was born out of a journey that began in April 2010 when Boland had a near-death experience and the new realities of his physical and mental health he has had to deal with. As often happens, such a life-changing event has brought about a new appreciation for the simple things in life and the desire to help others on a similar path. Boland says, “My hope in sharing {my music} with others is that it may help them hear the whispers of their own soul and those of its Creator. Listen, breathe, and dream again.” A classically-trained musician from an early age who has explored a wide variety of music genres, Boland’s touch is graceful and masterful, and his music is deeply moving. Some of the tracks are solo piano, and others include Will Ackerman on acoustic guitar, Charlie Bisharat on violin, Eugene Friesen on cello, Jill Haley on English horn, Jeff Pearce on Chapman Stick, and others. It is interesting to note that while he was recovering, Boland often listened to the music of Fiona Joy Hawkins, who later introduced him to Will Ackerman. Thank you, Fiona!

Soul Whispers begins with “Remembrance,” a captivating piano solo that grabs your attention with its gentle beauty and hangs on tight. We’re into something special here! “Intimacy (Into Me See)” continues the blissful wonder with a tender duet for piano and English horn. “Beyond Words” is an evocative and elegant duet for piano and cello that adds ethereal vocals and Jeff Pearce’s beautiful “Stick” in the second half of the piece. “Letting Go,” a dreamy piano solo, has a simple melody with a strong emotional impact. “Awakening” begins as a gentle piano solo, adding Charlie Bisharat’s violin a couple of minutes in - magical! “Longing” is a more experimental piano solo - possibly an improvisation - that dwells in the lower reaches of the piano, dark and moody. A haunting piano and cello duet, “Contemplation” is deeply introspective and passionate. If I had to choose one favorite from this exceptional album, I think it would be this one. “To Dream Again” brings this compelling album to a close with a classically-influenced piano solo that’s as soft and comforting as a drifting cloud. Sigh....

What an incredible debut! I sincerely hope this is just the first of many recordings from Dean Boland, and I have no doubt this will be one of my favorite albums of the year. Soul Whispers is available from www.bolandmusic.com, Amazon, and iTunes. I give it my highest recommendation!
March 15, 2012
This review has been tagged as:
Debut AlbumsKathy's Favorites: 2012
Dean's Website Dean's Artist Page on MainlyPiano
Album Links
Amazon (referral)iTunes
This site contains affiliate links to products. We may receive a commission for purchases made through these links.
More reviews of Dean Boland albums