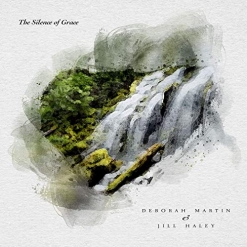 Deborah's Website Deborah's Artist Page on MainlyPiano Jill's Website Jill's Artist Page on MainlyPiano
Album Links
Amazon (referral)Apple/iTunesSpotifySpotted Peccary
This site contains affiliate links to products. We may receive a commission for purchases made through these links.
The Silence of Grace
Deborah Martin and Jill Haley
2021 / Spotted Peccary
50 minutes
Review by Kathy Parsons
The Silence of Grace is the first collaborative album by Deborah Martin and Jill Haley, and is Haley's debut on the Spotted Peccary label. The two artists explored a variety of majestic locations in the Pacific Northwest for the inspiration for this music, which is a rich blending of oboe and English horn (Haley) with ambient electronic textures and melodies as well as a variety of percussion (Martin). Overall, the music is very soothing and calming, bringing images of the many shades of green, blue and gray that abound in the PNW (I'm on the Oregon Coast) and the misty outlines softened by drifting fog and frequent rain and drizzle.

Deborah Martin is a top-selling and award-winning artist with a passion for exploring the depths of thematic composition by layering live and studio-recorded sounds to create unique ambient electronic expressions. She has been with Spotted Peccary since 1991. Jill Haley is best-known as an oboist and English horn artist and composer, but is also an excellent pianist. She has spent time in many of the US National Parks and has composed music while living there as an Artist-In-Residence or during extended visits. She also frequently appears as a guest artist on albums produced at Will Ackerman's Imaginary Road Studio.

The Silence of Grace opens with the title track, a very open and spacious piece that reflects the calm of unspoiled nature, perhaps as the sun rises or sets, and the profound sense of serenity that can infuse your soul in such a place - a magnificent beginning! "Indian Heaven" shimmers with the spirits of the ancients. Ethereal electronic sounds, oboe, and slow occasional drumbeats create a sense of mystery and timelessness. "Verdant Sanctuary" makes me think of the otherworldly magic of being in the Olympic Rainforest where I actually expected to see fairies and other tiny creatures playing among the mosses, mushrooms and flowers. Western Oregon and Washington are known for their rain, mists and fog which often lead to the formation of spectacular waterfalls, lakes and streams. In "Fountains," the light chimes/bells sounds make me think of rainfall dancing on puddles as well as the beautiful sparkle of water droplets as they cascade down a waterfall and into a pool. Beautifully atmospheric and peaceful, this one's a favorite! I also really like "From Fire Into Water," a two-part piece that begins with the exciting and compelling rhythms of a didgeridoo and light percussion behind Haley's English horn (the "Fire" half of the piece) and then melts into a slowly-flowing "Water" theme that is so relaxed and serene with all the time in the world to get from one place to the next. "Water Flows of Clouds and Thunder" begins with mysterious background sounds that could be wind and thunder before blending with delicate harp (Martin) and layered oboe that are both oh so tranquil - an amazing massage for the mind and spirit!

The Silence of Grace is an exceptional album that combines the gifts of two exceptional artists! I hope it won't be Deborah Martin and Jill Haley's only collaboration! The album is available as a CD, download or to stream from sites like SpottedPeccary.com, Amazon, Apple/iTunes and Spotify.