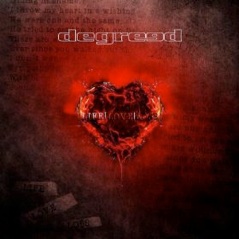 Degreed's Website Degreed's Artist Page on MainlyPiano
Album Links
Amazon (referral)iTunes
This site contains affiliate links to products. We may receive a commission for purchases made through these links.
Life Love Loss
Degreed
2010 / MelodicRockRecords
42 minutes
Review by Michael Debbage
Life Love Loss is the debut album from Sweden’s latest talent Degreed and what a debut it is! A precise and passionate cross hitter of hard rock, AOR with a slight sensibility of modern rock, Degreed’s freshman effort is chockablock full of melodic rock anthems that have an instantaneous appeal to them. It is not restricted to one or two blazing hits as the compositional efforts are sustained throughout the running time of this truly impressive debut that concludes with the album’s sole tender ballad.

This Swedish import was formed back in 2005 and began to put together demos as they marketed for a label to promote them. It took 5 long years to get signed to a label only to be passed up by the major league labels and even the significant independent Italian label Frontiers Records making the mistake of overlooking them. This allowed Andrew McNeice, the founder and creator of the internet website Melodic Rock to sign them to his recently formed label Melodic Rock Records and since then there has been no looking back.

Positive reviews have been pouring in with many of the critics raving about the opening energetic track “B.O.D” as well as the cover of the Steve Perry (Journey) song “Captured By The Moment”. The praise is most worthy as “B.O.D” is aggressive yet entirely melodic with no shame in placing the keyboards in the forefront only intensified by the crunching guitars and gnarly rhythm section. It is a great way to start the album with a heavenly chorus and the keyboards and guitars dueling in utter harmony. Meanwhile, their rendition of the mid tempo Perry composition is also impressive keeping the spirit of the song completely intact yet still placing their own twist on this overlooked classic.

The remarkable results are not just limited to the above two mentioned tracks which you will quickly find out as you thrust into the album. The pounding drums of Mats Ericsson and the intense guitar riffs of Daniel Johansson and Jesper Adefelt let loose on the moody but toe tapping “Human Being?” While Mikael Jansson focuses for the most part on the use of his synthesizer, this time around he is featured on the Hammond organ. The results are significant as are those found on “Color Me” with vocalist Robin Ericsson pushing his vocal range. His vocal style somewhat parallels Europe’s Joey Tempest (remember “The Final Countdown”?) but Robin is not a copycat as he indelibly stamps his own vocal styling. Backtrack a little and listen to the pulsating “Arms Of Misery” where Degreed pound out the modern rocker followed by the more traditional classic rocker “A Little Bit” that has a superb chorus that will have you singing along the very first time around. And after eleven tracks of blistering ear candy Degreed close out the album with the soulful reflective ballad “By Your Side” that allows us to the see the more tender side of Robin’s vocals along with Jansson’s piano work supplemented by a simple but hauntingly beautiful string arrangement.

Degreed is another utterly impressive import from Sweden that has you scratching your head and begging the question what is in their water? It also leaves you asking what’s next for this new talent? Degreed should enjoy every moment of their time in the spotlight as these marvelous melodic rock anthems deserve your complete attention. They are so addictive and memorable that their music will have you reaching for the repeat button over and over again. That said, Life Love Loss certainly has life and much love via its passionate melodies but there is certainly no loss here except to those of you that are missing out on this new arrival.

July 23, 2011
This review has been tagged as:
Debut Albums
Degreed's Website Degreed's Artist Page on MainlyPiano
Album Links
Amazon (referral)iTunes
This site contains affiliate links to products. We may receive a commission for purchases made through these links.