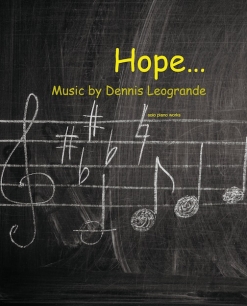 Dennis' Website Dennis' Artist Page on MainlyPiano
Album Links
The Great Kate Studio
This site contains affiliate links to products. We may receive a commission for purchases made through these links.
Hope
Dennis Leogrande
2022 / Dennis Leogrande
37 minutes
Review by Kathy Parsons
There was a span of nine years between Dennis Leogrande's first album and his second one (Yesterday Once More in 2003 and Just Sayin' in 2012) and although it's been ten years between albums again, the great news is that Dennis has two new albums he is releasing in 2022 - Hope and Déjà Vu. Like his previous albums, the nine piano solos on Hope reflect the wide range of Leogrande's musical life and experience. Most of the pieces have a strong jazz influence, but some are more classical, two are bluesy, a couple are upbeat and some are slower and more reflective - a wonderful combination of moods and expressions! Leogrande composed all nine of the pieces and plays all but two - Ron Levy performed those two tracks. The album was recorded on a Yamaha C3 (6'1") grand piano in Leogrande's own The Great Kate Studio in New Jersey.

Dennis Leogrande has been a music educator and music supervisor in the New Jersey public schools where he taught band and string instruments in addition to directing bands, jazz ensembles, and orchestras. He holds a Masters degree in Music Education from New York University as well as a Supervisor of Music degree. In addition to teaching, Leogrande has published numerous educational works, composed music for animated films, and operates his recording studio, The Great Kate Studio.

Hope begins with the title track, a beautiful piece that very accurately expresses the odd mix of emotions most of us have felt at various times during the past few years. Through it all, hope has been kept alive, and for many of us, that hope has manifested itself via some of the amazing music that has been created during the Covid-19 pandemic. Dreamy and expressive, "Hope" is a great opening track! "How Long Have You Known" seems to flow directly from the heart to the fingers to the piano keys. Feelings of deep sadness run through the piece and express far more than words ever could. "I Can Explain" continues in a similar slow jazz style, although it isn't nearly as sad as the previous track and seems to be a musical bridge to understanding. It's no secret that I love piano blues, and "I Got This" is a good example of why. Played by Ron Levy, it's bold and funky with just enough bravado and attitude to be fun. "Just This Once" returns to a quieter, more introspective mood that flows with the spontaneity and honesty of a deep conversation between close friends. "Strut Yourself" is the other piece performed by Ron Levy, and it's also a fun, bluesy piece sure to put a smile on your face! Although it is very free, "Through It All" has a more distinctive melody than some of the other tracks - kind of like the soundtrack to a story of your own creating. Beautifully heartfelt, it's another favorite!

Hope is well worth the wait between albums and is now available from The Great Kate Studio store. I give Hope an enthusiastic both thumbs up!

April 14, 2022
Dennis' Website Dennis' Artist Page on MainlyPiano
Album Links
The Great Kate Studio
This site contains affiliate links to products. We may receive a commission for purchases made through these links.
More reviews of Dennis Leogrande albums 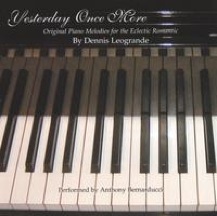 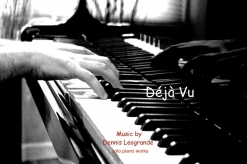 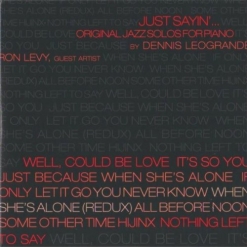