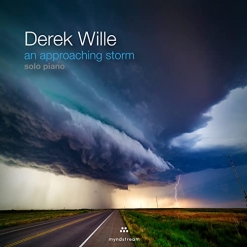 Derek's Website Derek's Artist Page on MainlyPiano
Album Links
Amazon (referral)Apple/iTunesSpotify
This site contains affiliate links to products. We may receive a commission for purchases made through these links.
An Approaching Storm
Derek Wille
2021 / myndstream
44 minutes
Review by Kathy Parsons
An Approaching Storm is Derek Wille's solo piano debut on the myndstream label, but Derek is no newcomer to the music business. He has worked for more than thirty years as an internationally-known musician who has produced and contributed to hundreds of recordings for other artists. He has released more than two dozen albums in the jazz, rock and solo guitar genres and that versatility comes across loud and clear in his piano music as well, as does his humor, compassion and sensitivity. Quoting Wille: "I have been feeing remote and disconnected. The pandemic. Middle age. Life in general. Inspired by hope, this collection of music is my intention for the future.... I have been performing, producing and composing music for decades. But this project has come along giving me an opportunity to get my music out to the whole world for the first time. Solo piano is personal, intimate and real." Amen to all of that! And what an amazing album An Approaching Storm is! The eleven original piano solos reflect a variety of moods, relationships, and the ups and downs of life. What is consistent from one piece to the next is soulful expression and heartfelt sincerity. This is music to get lost in, to find refuge in and to savor again and again - and again.

An Approaching Storm begins with the title track, a piece that starts out calmly, gradually becoming darker and more turbulent as clouds gather and the wind picks up. A little bit past the half-way point, the sun breaks through the clouds, but the storm isn't finished yet. What a great opening track! "Last Kiss" is a poignant tale of sadness and loss that pours from the heart and out through the fingers on the piano keys. This piece would be perfect behind the closing credits of an emotional movie! I love "Persistence"! A quickly-moving repeated pattern on the left hand supports the much freer right hand that dances all over the upper end of the piano keyboard as well as crossing over into the deep bass. This is my favorite track on the album!!! "Still Friends" first appeared on Wille's 2001 CD, Save Me From Myself #2 and there is a video of him playing this beautiful and deeply expressive piece on his website. Several passages in "Song For Linie" are played in the upper end of the piano, giving it a feeling of lightness and innocence. As it moves down to the mid-range of the keyboard, it feels stronger and more serious. I really like this one, too! "Green In Blue" is very slow and ambient - peaceful tranquility set to music - another favorite. The lively and joyful "Cindy K" paints a colorful picture of someone who in enthusiastic and always on the move. I cherish mornings that feel like "Waking Up Late Morning"! Warm, lazy and overflowing with blissful contentment, it's a wonderful closing to a truly outstanding album!

An Approaching Storm is an incredible introduction to the music of Derek Wille! I'm beyond impressed and will be looking for more of his music! The album is available from myndstream.com, Amazon, Apple Music/iTunes and streaming sites such as Spotify. Very highly recommended!
October 22, 2021
This review has been tagged as:
Debut Albums
Derek's Website Derek's Artist Page on MainlyPiano
Album Links
Amazon (referral)Apple/iTunesSpotify
This site contains affiliate links to products. We may receive a commission for purchases made through these links.