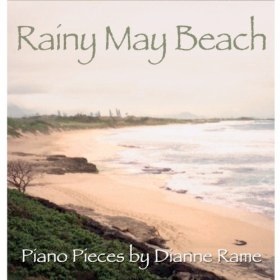 Dianne's Website Dianne's Artist Page on MainlyPiano
Album Links
Amazon (referral)iTunes
This site contains affiliate links to products. We may receive a commission for purchases made through these links.
Rainy May Beach
Dianne Rame
2011 / 2013 / Dianne Rame
20 minutes
Review by Kathy Parsons
Rainy May Beach is pianist/composer Dianne Rame’s first recorded collection of original pieces. The eight piano solos depict the seasons and are composed and performed in a contemporary classical style that is very spare and free. Rame grew up in Hawaii and often traveled to England, which gave her a strong sense of atmosphere and enabled her to find the musical essence of a place or time. The music for Rainy Day Beach was composed over a two-year period and reflects Rame’s varied background which includes classical, rock, folk, pop, and jazz. I should probably mention that this is a relatively short album at twenty minutes, but the pieces are concise and to-the-point.

Rainy May Beach begins with “After a Snow,” a piece that expresses the peaceful beauty of new snow and the hushed, sparkling atmosphere it creates. “Early Spring” gracefully conveys the anticipation of new life and the wonder of new growth. The title track is quite a bit livelier with rolling broken chords in the bass countered with a lyrical treble. “High Summer” is languid and relaxed, moving forward freely and leisurely. The stately “First Harvest” seems to express the change of season from summer to early fall and the mix of emotions that accompany that annual evolution of time. The warm and flowing bass line in “Almost Dark” is a welcoming and soothing accompaniment to the more free-form melody - a favorite. The lovely “Departed” has a melancholy tone, but is not despairing or mournful. At almost five minutes, “How the Winds Blow” is by far the longest track on the album. A variety of themes are woven together in such a way that some of the music feels composed and some of it feels spontaneous and in-the-moment.

Rainy May Beach is a fascinating debut and I look forward to hearing more from Dianne Rame. The album is available from Amazon, iTunes, and CD Baby. Check it out!
February 4, 2014
This review has been tagged as:
Debut Albums
Dianne's Website Dianne's Artist Page on MainlyPiano
Album Links
Amazon (referral)iTunes
This site contains affiliate links to products. We may receive a commission for purchases made through these links.