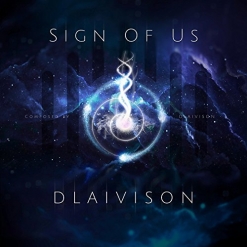 Dlaivison's Artist Page on MainlyPiano
Album Links
Amazon (referral)iTunesCD Baby
This site contains affiliate links to products. We may receive a commission for purchases made through these links.
Sign of Us
Dlaivison
2016 / DLAERS
57 minutes
Review by Kathy Parsons
Sign of Us is the debut album by Brazilian electronic artist, Dlaivison (Ribamares Silva), and what an impressive first album it is! Strongly influenced by Vangelis and Jean Michel Jarre, the album has a very powerful and dynamic sound that often goes beyond what we usually call “new age” music. With strong bass and drums creating propulsive rhythms on several of the ten tracks, I would think much of this music would appeal to a younger audience as well as those of us who are a bit more (ahem!) “seasoned.” A few tracks lean toward the ambient and space music categories, but overall, this is an amazing and varied musical journey. From the liner notes of the CD, Dlaivison says: “Music has the sublime power to create a parallel universe, allowing experiences on many different levels, be it physical, mental, and even transcendental ones. Sign of Us was composed with the idea of inviting the listener to participate in this experience, to reflect on that connection and transcend to a new world.”

Dlaivison started piano lessons at the age of 8, but was always drawn to electronic music because it helped him understand what he wanted to do with his life. His goal was to be a piano/synthesizer player or a technologist (electronic engineer, computer scientist) and, at least for now, he is doing both with a full-time job as an electronic engineer for a US-based company in Brazil. The album was recorded in Dlaivison’s home studio over a two-year period and was then mastered by Felipe Fantoni at NaTrilha Produces studios.

Sign of Us begins with “Dreams,” an invitation to a journey of reflection on what we perceive as reality and how we shape it. A variety of electronic sounds dance around a driving beat and draw us into the music. “The Wind’s Valse” is a musical comparison of wind and human breathing, and the strength and lightness of both. “‘Belle’” is an homage to all women and to the female universe.” Flute, keyboards and a gentle rhythm gracefully suggest feminine characteristics in a very beautiful way. “Calyx” is a favorite. The driving beat sends the magical melody joyfully soaring in a celebration of mankind’s total connection to the Universe. Love it! “Heroes” is dedicated to those who inspire us to be better people - to all of the everyday heroes. The first part of the piece is very ambient, but builds to include more orchestral sounds as well as a strong drum beat - another favorite. “Amazon” reflects on the connection between man and nature by using a fusion of electronic, human, and nature sounds. It’s quite an interesting combination and it’s easy to let your focus drift between the various elements of the piece. “The Journey” is the closing track, but at a bit over eight minutes, it is a musical journey of its own. Peaceful and soothing, it has a driving beat behind the ethereal voices and compelling melodies.

Dlaivison brings a new and original voice to contemporary music - something that is always welcome! Expect to hear a lot more about this exceptional album! Sign of Us is available from Amazon, iTunes and CD Baby. Highly recommended!

September 2, 2017
This review has been tagged as:
Debut AlbumsKathy's Picks
Dlaivison's Artist Page on MainlyPiano
Album Links
Amazon (referral)iTunesCD Baby
This site contains affiliate links to products. We may receive a commission for purchases made through these links.