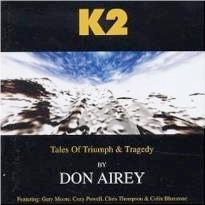 Don's Website Don's Artist Page on MainlyPiano
Album Links
Amazon (referral)iTunes
This site contains affiliate links to products. We may receive a commission for purchases made through these links.
K2 - Tales of Triumph & Tragedy
Don Airey
1988 / DonAirey.com
51 minutes
Review by Michael Debbage
When it comes to keyboard players in the world of rock music, the first names that come to mind are the likes of Keith Emerson, Ken Hensley and Jon Lord to name a few. So those of you who are not rock connoisseurs are probably wondering who Don Airey is. A member of Deep Purple since 2002, Airey’s resume prior to that is impressive and copious. As a result, limited time resources have prevented Airey from being prolific as a solo artist. Nevertheless, back in 1988 Airey found time to release his ambitious concept album K2, dedicated to the tragic and triumphant mountain expedition of 1986 that claimed the lives of twelve of the world’s best climbers.

Classically trained and an avid supporter of the Hammond Organ, Airey’s resume reads like a who's who of rock and roll. Active either as a member or a significant contributor, Don’s past associates have included Cozy Powell’s Hammer, Colosseum II, Rainbow, Ozzy Osbourne, Jethro Tull, Black Sabbath, Whitesnake, Gary Moore, Michael Schenker, Brian May and Deep Purple just to name a few. This list is far from exhaustive, which may explain Airey’s ability to release only two solo albums in the last two decades.

That said, some of his past associates where kind enough to return the favor and appear on K2, specifically drummer Cozy Powell throughout the album as well as guitar extraordinaire Gary Moore on three of the tracks. Powell’s most significant performance can be found on the progressive and outright eight-minute rocker “Death Zone/Whiteout”. The latter part of the song features Powell and Airey just going at it making for a very aggressive, pensive and moody epic. Meanwhile, Gary Moore’s seductive guitar work on “Song For Al (Instrumental)” creates some magical moments with Airey’s flighty keyboard performance, which is likely one the album's pivotal instrumental moments.

Those of you craving more of Airey’s keyboard work, check out “Summit Push” and the very short jazzy interlude “Blues For J.T”; they will leave you craving for more. The aforementioned leads right into the melodic magic of the mid-tempo ballad, “Julie (if you leave me),” that features the vocal rendition of Colin Blunstone. Once again, Airey’s swirling keyboard work is brilliant though never distracting from the melody and song structure.

Originally released back in 1988, the album was re-mastered and repackaged in 2004 and includes a bonus track. While the production elements are a little dated, K2 Tales of Triumph & Tragedy is a very ambitious concept that has no specific genre focus, intermingling vocal and instrumental renditions and even the occasional narrative reading. But if you are patient enough, the payoff is worth it. Better yet, if you enjoyed this album, you will no doubt love Airey’s 2008 project A Light In The Sky. For those of you new to Don Airey, be adventurous and come and explore the world of Don Airey.
August 21, 1988
Don's Website Don's Artist Page on MainlyPiano
Album Links
Amazon (referral)iTunes
This site contains affiliate links to products. We may receive a commission for purchases made through these links.