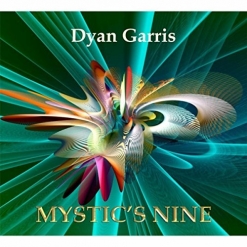 Dyan's Website Dyan's Artist Page on MainlyPiano
Album Links
Amazon (referral)iTunes
This site contains affiliate links to products. We may receive a commission for purchases made through these links.
Mystic's Nine
Dyan Garris
2016 / Dyan Garris
43 minutes
Review by Kathy Parsons
Mystic’s Nine is composer/pianist/keyboardist Dyan Garris’ thirteenth album and was composed and recorded over a period of four years. With a very impressive group of contributing artists, Garris has created a collection of eleven tracks that pertain to the mystical number nine. It is also a concept album “with the theme of the resilience of the indomitable human spirit and triumph over adversity.” Nine of the pieces are instrumentals and two are vocals. Some of this music is ambient and ethereal while other pieces are much more upbeat, melodic and vibrant. It’s a colorful mix that works well in the background as well as with focused listening; I especially enjoyed listening the album while driving down the coast in the rain! Garris is a classically-trained pianist and violinist, but she is also a visionary mystic, voice recognition psychic, and trance channel medium who reads from the Akashic Records.

Mystic’s Nine opens with the rhythmic and very lively title track. Keyboards, wordless vocals, and driving percussion (Joe Bauer) send the spirit of the album joyfully soaring from the very first note! “Mystic Sea” begins with the sound of flowing water (which is audible throughout) and then becomes a blissfully ambient, gently floating dream that features Scott Schaefer on flute. “Muse’s Gift” is one of the two vocals and features Amber Norgaard (the lyrics are in the liner notes of the CD) and Peter Sterling on harp. “Mystical” cranks up the rhythm behind Jeff Oster’s peaceful flugelhorn and trumpet (Oster co-wrote this piece with Garris) - a favorite. Joe Bauer returns on “Cloud 9” with a pulsating rhythm that propels the piece - another favorite. “The Mist” is the second vocal piece, this time with Amber Norgaard and Margo Joy, and cello by Michael G. Ronstadt. Heartfelt and bittersweet, it’s a beauty! My favorite piece on the album is “East on 9th.” Resonating with a strong beat, a cinematic sweep, and a slightly exotic flavor, this one had me hitting the “replay” button several times! “Water For the Soul” quiets down a bit in a more classic new age mode that is warm, open and free- form, bringing the album to a peaceful close.

Dyan Garris is a fascinating artist who brings a wide range of influences to her music. Overall, Mystic’s Nine is much livelier than most albums in the “new age” genre, and it’s a sound that I really like. The album is available from Amazon, iTunes and CD Baby. Recommended!
March 27, 2017
Dyan's Website Dyan's Artist Page on MainlyPiano
Album Links
Amazon (referral)iTunes
This site contains affiliate links to products. We may receive a commission for purchases made through these links.
More reviews of Dyan Garris albums 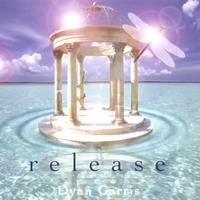 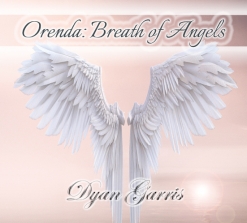