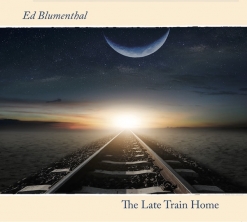 Ed's Website Ed's Artist Page on MainlyPiano
Album Links
Amazon (referral)iTunes
This site contains affiliate links to products. We may receive a commission for purchases made through these links.
The Late Train Home
Ed Blumenthal
2019 / Ed Blumenthal
47 minutes
Review by Kathy Parsons
The Late Train Home is Ed Blumenthal’s first album under his own name; he also released The Way The Story Goes in 2014 under the name EVI. The earlier album was solo piano and consisted of original music written many years ago. The Late Train Home was co-produced by Will Ackerman and Tom Eaton at Ackerman’s Imaginary Road Studios in Vermont and features many of the excellent musicians who often play on Ackerman’s productions. The ten original pieces express a range of emotions and experiences with a relaxed pace throughout and plenty of substance to satisfy a more focused listener. Guest musicians include Charlie Bisharat (violin), Eugene Freisen (cello), Jill Haley (English horn), Noah Wilding (voice), Premik Russell Tubbs (EWI), Tom Eaton (NS bass) and Will Ackerman (acoustic guitar). One track also includes the Zadar Sea Organ in Croatia (more about that below!). It is also interesting to note that reading the titles of the pieces in their playing order acts as a descriptive poem.

The Late Train Home begins with “Who Knows,” a beautifully-flowing piece for piano, cello and English horn. As usual, Freisen’s soulful cello adds depth and poignance, as does Haley’s English horn. Much of the piece is a quietly reflective piano solo with the other two artists adding tonal color in select passages. The music becomes bolder and more dramatic in the middle of the piece and then tapers off to a more subdued closing. “The Roads Imagined,” a duet for piano and EWI wind synth, overflows with longing and a touch of regret - a favorite! “We Walk On” combines piano, cello, English horn and voice with elegance and grace. The easy tempo suggests a walking pace - unhurried and enjoying being out and about. “The Hands We Hold” could be about many things - children who have grown up and moved away, past loves, elderly parents, etc. With deep emotion pouring freely from their hearts as well as their instruments, the piano and violin seem to mourn a painful loss. “Along The Way,” for piano and English horn, lightens the mood considerably with a sunny daydream. The title track is the only piano solo this time and beautifully demonstrates what an expressive pianist Blumenthal is. As I listen to “Until Then,” I’m watching several birds effortlessly gliding on wind currents, swooping through the air without having to flap their wings at all. That’s exactly what this piece feels like to me. Piano and EWI wind synth create effortless perfection! “The Sea Sings” has a fascinating story. To quote the liner notes: “Perched along 230 ft. of coastline in Zadar, Croatia, lays an architectural wonder; a series of marble steps that join the land into the sea. These steps conceal a labyrinth of tubes that produce harmonic tones as the sea water rushes in. Mesmerized by the haunting music the wind and tides were composing, I sat down at my piano, turned on the recorder, and improvised an accompaniment. This was done in one take, and I have only ever played this song once.” Tom Eaton then mixed “The Sea Organ” with Blumenthal’s piece. It’s an incredible one-of-a-kind piece, and I have just added a new destination to my “bucket list”!

The Late Train Home is a breath of fresh air and is excellent from the first note to the last. I hope there will be many more albums coming from Ed Blumenthal! The album is available from Amazon, iTunes, CD Baby and the various streaming sites.

June 2, 2019
This review has been tagged as:
Kathy's Picks
Ed's Website Ed's Artist Page on MainlyPiano
Album Links
Amazon (referral)iTunes
This site contains affiliate links to products. We may receive a commission for purchases made through these links.