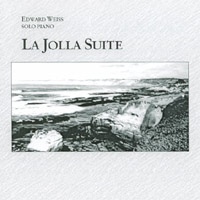 Edward's Website Edward's Artist Page on MainlyPiano
Album Links
Amazon (referral)iTunes
This site contains affiliate links to products. We may receive a commission for purchases made through these links.
La Jolla Suite
Edward Weiss
2000 / Quiescence Music
54 minutes
Review by Kathy Parsons
From the opening strains of La Jolla Suite, a strong George Winston influence can be detected. Too many contemporary pianists are compared to Winston, so I usually avoid such a reference, but this one really struck me. By no means is Weiss imitating Winston or trying to clone his style, but the influence is there. It could be the rather simple, “folky” melodies or Weiss’s percussive attack in sections, or maybe it’s just the outdoor themes and open feeling to the music. Being an ocean-junky myself, I really enjoy Weiss’s pianistic portraits and impressions of the Southern California coastline and its natural inhabitants. La Jolla Suite (pronounced “la hoya”) consists of twelve pieces that are all smooth and soothing without a high snooze factor. The music is complex enough to invite repeated listenings, but is accessible enough to “get” almost immediately. The album was recorded live, with the audience reactions edited out except at the end. The occasional “clams” are not edited out, but are forgivable.

My favorite tracks on this debut album are “Torrey Pines”, which is at once flowing and majestic, bold and gentle; “Sea Caves” which is chilly and searching - very classical in style; and “Jewel of the Pacific”, which shimmers and sparkles. Weiss makes effective use of arpeggiations in both hands, letting a natural rubato add to the ebb and flow of his music. The music is fairly unstructured, giving it an improvised, free-flowing feel. As I mentioned above, I really enjoy Weiss’s music, and think he has a good chance of becoming a major player among contemporary pianist-composers.

La Jolla Suite is currently available from cdbaby.com.
August 8, 2000
This review has been tagged as:
Debut Albums
Edward's Website Edward's Artist Page on MainlyPiano
Album Links
Amazon (referral)iTunes
This site contains affiliate links to products. We may receive a commission for purchases made through these links.
More reviews of Edward Weiss albums 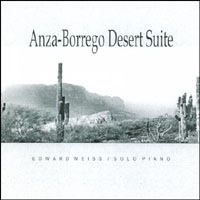