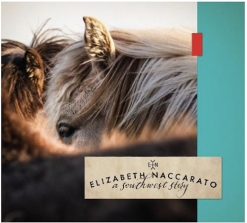 Elizabeth's Artist Page on MainlyPiano
Album Links
Amazon (referral)Apple/iTunesSpotify
This site contains affiliate links to products. We may receive a commission for purchases made through these links.
A Southwest Story
Elizabeth Naccarato
2022 / San Luis Music
52 minutes
Review by Kathy Parsons
A Southwest Story is the seventh album by pianist/composer Elizabeth Naccarato and features thirteen piano instrumentals influenced by the southwestern United States' roots in Spanish classical music, Native American culture and The Old West. The album also features artists that include Leon Christian (guitar and bass) and Nancy Rumbel (Native flute and English horn) and was produced by Michael Gettel. The music is varied and was inspired by Elizabeth's love of the landscape of Southern Colorado where she now resides. The album includes eleven original compositions and two classical pieces.

A Texas native, Elizabeth started piano lessons at the age of six and won her first piano competition three years later. She earned her Bachelor's and Master's degrees from The University of Southern California and performed solo classical piano throughout Texas and on the West Coast. She began composing after moving to the Pacific Northwest and released her first album, Jarrell's Cove, in 1995.

A Southwest Story begins with "San Luis," a beautiful duet for piano and Spanish guitar. Inspired by the majesty of the mountains as well as the fertile valley, Spanish settlers were reminded of their home country and established what is now the oldest town in Colorado. I love the peaceful nature of this track! The energetic "Wild Horses" includes piano, violin, percussion, and bass and captures the feeling of watching horses galloping through the open land and stopping to rest by a stream or river. "Sacred Land" begins with a haunting Native American flute solo before becoming a gorgeous trio for piano, English horn and Native flute. It was named for the land between Ute Mountain and Mt. Blanca, an area Native Americans say is sacred. "Mi Hito, No!" is a playful musical expression of a phrase Spanish mothers often use in defense of their sons. "Fandango" is a spirited guitar solo by Spanish composer Federico Moreno Torroba (1891-1982), performed by Leon Christian. "Spanish Dance No. 2" is an elegant and heartfelt piano solo composed by Enrico Granados (1867-1916). The beautiful "La Sierra" is a piano solo accented with light percussion and gentle chimes. It is named for a large tract of land five miles east of San Luis that the locals call "La Sierra." Warm and dreamy, it's obvious that a lot of love went into this piece. I also really like "Shrine of the Stations of the Cross," a haunting duet for piano and Native flute that pays homage to the bronze statues and breathtaking views at the shrine. On "Dusk," piano, violin and guitar paint a very peaceful picture of the changing colors as the sun begins to set. Love it! "Cowboy's Waltz" is a light-hearted tribute that always makes me smile. (I wonder how many old-time cowboys actually knew how to waltz!) Elizabeth says in her notes that the solo piano "'Flower Moon' was written after I experienced a Flower Moon in May, and dreamed of Chopin." My favorite piece on the album, Chopin's influence can definitely be heard in the graceful nature of the music. Ahhhh!

A Southwest Story is available on Amazon and Apple Music/iTunes as well as streaming sites such as Spotify. This is a really wonderful musical tour of the Southwest! Don't miss it!

July 25, 2022
Elizabeth's Artist Page on MainlyPiano
Album Links
Amazon (referral)Apple/iTunesSpotify
This site contains affiliate links to products. We may receive a commission for purchases made through these links.