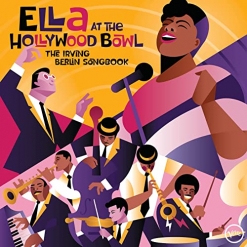 Ella's Website Ella's Artist Page on MainlyPiano
Album Links
Amazon (referral)Spotify
This site contains affiliate links to products. We may receive a commission for purchases made through these links.
Putting' On the Ritz (Live) (single)
Ella Fitzgerald
2022 / Verve/UMe Records
2 minutes
Review by Steve Yip
This is a very exciting development with the release of the single ‘Puttin’ On the Ritz’ from the forthcoming Ella At The Hollywood Bowl: The Irving Berlin Songbook. Why exciting? I have always loved the works by Ella Fitzgerald as her vocalizations have always impressed me as being so seamless in artistic control and delivery. So I went and listened to an early recording by Ella of ‘Puttin’ On the Ritz’, and there are several of them. I listened to one studio version where she was backed by the Paul Weston Orchestra, who also backed her in this 1958 live concert, and listened several times. And then went back to listen to the released live single.

There is much joy found in this single release from this forthcoming release and most likely produced by the synergetic moment between the artist, the Paul Weston Orchestra, and the appreciative audience. Clearly, to me, there was a qualitative difference found in the higher energy in this live album. With that said, this single portends a great album to look forward to coming June 24, 2022!

I also learned a lot from the press statement announcing the coming release of Ella At The Hollywood Bowl: The Irving Berlin Songbook, “At the inaugural Grammy Awards, her Irving Berlin album won Ella her first Grammy for “Best Vocal Performance, Female,” and was also nominated for “Album Of The Year.” Aside from the lucky audience at the Hollywood Bowl that night, it wasn’t generally known, until the discovery of these tapes, that Ella had ever performed any of the Songbook arrangements in concert, let alone that such a pristine and sonically sumptuous recording existed.” Nuff said!

May 21, 2022
This review has been tagged as:
JazzSingle Release
Ella's Website Ella's Artist Page on MainlyPiano
Album Links
Amazon (referral)Spotify
This site contains affiliate links to products. We may receive a commission for purchases made through these links.