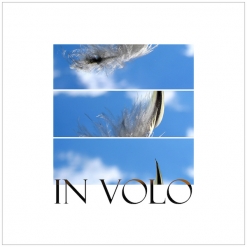 Bzur's Website Bzur's Artist Page on MainlyPiano
Album Links
SpotifyDeezerApple MusicBandcampiTunes
This site contains affiliate links to products. We may receive a commission for purchases made through these links.
In Volo
Bzur
2018 / Bzur Music
15 minutes
Review by Kathy Parsons
In Volo is a seven-track solo piano EP by Italian pianist/composer Bzur. The seven short piano meditations depict a journey to a (not so) fictional bird sanctuary. This gentle, graceful music sounds like it is played with either the soft (una corde) pedal on or with the piano strings lightly muted, allowing for some of the sounds of the piano mechanisms to be heard. (Those sounds are not nearly as prominent as they are on several of the albums I’ve heard with the piano “prepared” in this way.) All seven pieces are delicate and almost fragile, but they are all very expressive in their openness and simplicity.

Bzur started studying the piano at the age of 7. After several years, he became interested in composing, with his early works strongly influenced by Jean Michel Jarre and Vangelis. He has composed more than 400 tracks ranging from experimental and ambient electronic music to solo piano to orchestral works and his music is often inspired by poetry, science fiction, astronomy and figurative art. In 2012 he graduated in “Musica e nuove tecnologie” from the Cagliari Conservatory in Italy. He also collaborates with other artists as well as working by himself.

In Volo begins with “Lontano” (“Far” or “Distant”), a very open, melancholy prelude that sets the tone of the album. The title track (“Flight”) seems to describe the movement of wings first and then the ease and freedom of soaring through the air. “Come la brezza” (“Like a Breeze”) suggests moving forward but is also warm, delicate and effortless - I love this one! “Piume” (“Feather”) seems to express both fragility and strength. The sound of the inner workings of the piano gives the piece a feeling of vulnerability and the repeated notes on the left hand give it a slightly edgy intensity - I love it! “Vicino” (“Near”) has a lighter spirit and a sense of optimism. “Ali” (“Wings”) is a bit darker at the beginning, perhaps reflecting on the effort needed to take flight. A second theme is much lighter and freer, but then the darker theme returns and alternates with the lighter theme - also a favorite. “L’arrivo” (“The Arrival”) safely and joyfully brings us to the end of our journey to “the (not so) fictional bird sanctuary.”

Bzur is an exciting discovery for me and I can’t wait to hear more of his music!
December 18, 2018
This review has been tagged as:
Kathy's Favorites: 2018Kathy's Picks
Bzur's Website Bzur's Artist Page on MainlyPiano
Album Links
SpotifyDeezerApple MusicBandcampiTunes
This site contains affiliate links to products. We may receive a commission for purchases made through these links.