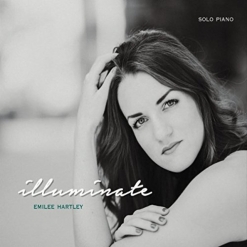 Emilee's Website Emilee's Artist Page on MainlyPiano
Album Links
Amazon (referral)iTunes
This site contains affiliate links to products. We may receive a commission for purchases made through these links.
Illuminate
Emilee Hartley
2017 / Emilee Hartley
49 minutes
Review by Kathy Parsons
Illuminate is the debut album by pianist/composer Emilee Hartley. The fourteen piano solos on the album were composed in a very classical style yet communicate a contemporary sensibility that is warm, expressive and accessible. A Colorado native, Hartley started taking piano lessons at the age of four and won first place in the Colorado State Competition four different times. She also won “Best Piano Piece by a Female Composer” at a competition at Mesa State University. It is interesting to note that Hartley was also a competitive gymnast and now coaches a girls gymnastics team. Writing music is her biggest passion, however, and she explains the origins of the music as well as the album’s title: “I selected my favorite pieces from the last few years to create an album, and realized that many of the best pieces I've written have been nature scenes dominated by light. So I named it Illuminate, not only because many of these works have to do with the concept of light, but because I hope that my music, especially on my debut album, is a beacon of light and encouragement to its listeners.” The album was recorded at Piano Haven Studios on a Shigeru Kawai grand piano and engineered by Joe Bongiorno. As always, the piano sound is gorgeous.

Illuminate begins with “Raindrops On the Lake,” a wonderful musical description of a gentle rain falling on a quiet body of water. Lightly percussive over a smooth shimmering sound, it’s an intriguing and welcoming start! “Prelude to Dusk” is smooth and relaxed - a perfect piece for winding down after a busy day. “Shimmers” picks up the tempo a bit with a rolling/flowing accompaniment supporting a simple but gorgeous melody - a favorite! “The Unicorn (Enchanted Forest)” tells a graceful, magical story. “Lunae” is another favorite and reminds me a bit of some of Mendelssohn’s “Songs Without Words.” Light and gently flowing, it paints a peaceful picture of moonlight perhaps over a pond or the ocean. “The Abandoned Castle” shows us a little different side of Hartley’s composing. Much darker and heavier at the beginning, it’s easy to imagine a huge castle in the middle of nowhere, suffering the ravages of years of neglect. The second movement seems to recount the glory days of feasts and dancing in the massive halls of the castle. The final movement is more majestic and powerful - a fascinating story! “Morning Twilight” is lighter than air, dancing on the piano keys with joyful abandon and a feeling of carefree innocence. I hear hints of Beethoven in “Amare,” a buoyant tribute to love. I really like the dramatic changes in “Turning Of Time.” Sometimes swiftly flowing, it slows and becomes lyrical, dark, energetic, quiet and other qualities of the passage of time. “A Night of Winter” is absolutely icy, but is also peaceful, sparkling and very beautiful. It becomes more dynamic and dramatic in the second half of the piece, but is always beyond beautiful. “Journey” closes the album with the piece Hartley won the award for at Mesa State University. Stately and very classical, it tells an elegant story of adventure and travel to distant places - a great ending to an excellent first album!

Emilee Hartley is off to a very promising start with Illuminate and I’ll be looking forward to future recordings from her! The album is available from EmileeHartley.com, Amazon, iTunes and CD Baby. Recommended!

February 7, 2018
This review has been tagged as:
Debut AlbumsKathy's Favorites: 2018Kathy's Picks
Emilee's Website Emilee's Artist Page on MainlyPiano
Album Links
Amazon (referral)iTunes
This site contains affiliate links to products. We may receive a commission for purchases made through these links.