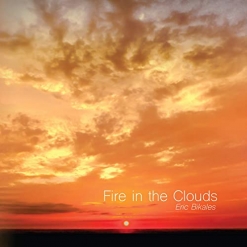 Eric's Website Eric's Artist Page on MainlyPiano
Album Links
Amazon (referral)iTunes
This site contains affiliate links to products. We may receive a commission for purchases made through these links.
Fire in the Clouds
Eric Bikales
2020 / Eric Bikales
32 minutes
Review by Kathy Parsons
Fire in the Clouds is the follow-up to Eric Bikales’ excellent 2018 album, Follow Your Heart. Inspired by the beautiful surrounding skies near his home in Nashville, TN, the album’s ten original pieces reflect Bikales’ long and impressive career in music. His might not be a household name, but it’s very likely that you’ve heard Bikales’ music on many of the major TV shows he has composed for, and you might have seen him playing flute and/or piano and keyboards behind Neil Sedaka, The Pointer Sisters, Stevie Wonder or some of the other artists he has toured with over the years. Most of the music on Fire in the Clouds is solo piano, but a few tracks include other instrumentation as well. Smooth and uplifting, this is the music of an artist who really knows his stuff and makes it sound effortless.

Born and raised in the midwestern US, Eric Bikales started playing the piano when he was six. At that tender age, he was able to play Ravel’s Bolero by ear, and classical piano lessons started soon after. He began playing the flute at nine, and at eleven was a featured soloist with the Kansas City Philharmonic. Several years later, Bikales started touring with a local band called Sanctuary before later moving to Los Angeles to pursue studio work. He later recorded four electronic albums as a new age artist before moving to Nashville and returning to the piano.

Fire in the Clouds begins with “Yellow Bird,” a lighthearted bit of musical sunshine with a relaxed tempo and an easy jazz feeling. “Cebu Sunrise” feels a lot like waking up warm and refreshed after a good night’s sleep, knowing you really don’t have to get up yet. Let’s add being able to watch the sun come up from a big window overlooking a beach! Yep, that’s what this piece feels like! “Journey Within” goes to a place that is peaceful and welcoming. Atmospheric sounds near the middle of the piece add texture and color. The title track begins with keyboards before becoming a piano solo. A little bit pop, a little bit jazz, the free and uncomplicated feel of the piece makes it easy to picture a bright, colorful sky. Bikales weaves in a few atmospheric sounds, but the piece is mostly piano. “Now This” is a 26-second jazz nugget that is catchy but ends quickly. “Khai” is named for Bikales’ wife and is a sweet solo piano love song that comes straight from the heart. I really like the improvisation in the middle of this one! “And Then” is another quickie at only 14 seconds, but it feels just right as a prelude to “Setting Sun,” my favorite piece on the album. This one has a a slightly Latin jazz flavor with its gentle rhythm and effortless melody - contentment set to music! I also really like “Reasoning With the Wind,” which adds keyboard strings and other instrumentation to the piano. Lively with a calm but energetic flow, this one is almost magical! “Kansas Wind” has an infectious gospel/bluesy feeling that just makes you feel good. This one has some keyboard instrumentation, too. A great close to a great album!

Fire in the Clouds is available from EricBikales.com, Amazon, iTunes and various streaming sites. Don’t miss it!
March 24, 2020
This review has been tagged as:
Kathy's PicksLatest Reviews
Eric's Website Eric's Artist Page on MainlyPiano
Album Links
Amazon (referral)iTunes
This site contains affiliate links to products. We may receive a commission for purchases made through these links.
More reviews of Eric Bikales albums 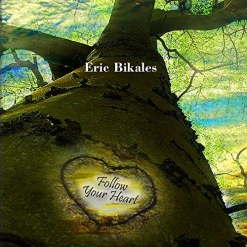