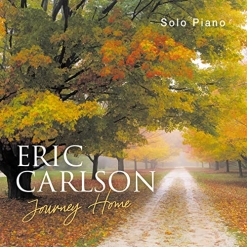 Eric's Website Eric's Artist Page on MainlyPiano
Album Links
Amazon (referral)Apple/iTunesSpotify
This site contains affiliate links to products. We may receive a commission for purchases made through these links.
Journey Home
Eric Carlson
2020 / Uplifting Music LLC
45 minutes
Review by Kathy Parsons
Journey Home is the outstanding solo piano debut by Eric Carlson, a classically-trained musician from Wisconsin who is also the principal keyboardist for The Racine Symphony Orchestra, a Registered Piano Technician and Sales Manager for Artistic Piano Service, and a sound/recording engineer. He has played piano, organ, and trumpet in churches all of his life and is currently the parish musician at St. John's Lutheran (LCMS) in North Prairie, WI. In addition to his classical training, Eric has been influenced by other music genres that include new age, rock and jazz. I have a feeling that Eric's music would sound great on almost any piano, but he recorded Journey Home at Piano Haven on Joe Bongiorno's superlative hand-crafted Shigeru Kawai, and the sound quality is amazing. All but one of the twelve tracks on the album are original compositions and all of the pieces have a warm and calming effect while expressing a variety of emotions. This album grabbed my attention the first time I listened to it, and I've been hooked ever since. I hope this is just the first of many albums from Eric! Sheet music for quite a few of Eric's pieces (including hymn arrangements) is available for download from his website. I have some of that sheet music and am really enjoying it!

Journey Home begins with "Autumn in Door County," a joyous piece that celebrates the fall colors and frequent visits to that area in Wisconsin where Eric's father retired. Originally composed as a piano and saxophone duet, there is a recording online of Eric and his dad performing it together. The warmly reflective title track "represents the long road I've been on with all of its twists and turns, which has brought me to the place where I now am." (quoting the liner notes of the CD). "Moonlight Rain" commemorates the 250th anniversary of Beethoven's birth and is a nod to his "Moonlight Sonata" without being overly obvious about it. I really love this piece and hope sheet music for it will become available soon! "Wishing Well" is Eric's deeply emotional arrangement of a song written by Phil and Laurie Adams (his sister and brother-in-law). Even without the lyrics, the poignant feelings of sadness and longing touch the heart. There are two versions of "Chorale" on the album that share the same theme, but the "Reprise" version is quite a bit shorter and livelier. Peaceful and uncomplicated, it was given its title because Eric could imagine a choir singing it. "Waterfall" is another favorite with its graceful descending notes and the feelings of freedom and excitement it expresses. "Missing You" eloquently conveys the emotional impact of losing someone dear. "Twilight Hymn" is another favorite with its relaxed grace and beautiful melody, bringing the album to a very calming and satisfying close.

If you are looking for some uplifting piano music with plenty of substance to keep you coming back for more, Journey Home could be a perfect fit. I really love this album and look forward to more music from Eric Carlson in the near-future! The album is available from Eric's website as a CD as well as a download, and can be purchased or streamed from Amazon, Apple Music/iTunes and various sites including Spotify. An auspicious beginning!

March 20, 2021
This review has been tagged as:
Debut AlbumsLatest Reviews
Eric's Website Eric's Artist Page on MainlyPiano
Album Links
Amazon (referral)Apple/iTunesSpotify
This site contains affiliate links to products. We may receive a commission for purchases made through these links.