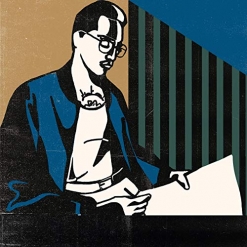 Eric's Artist Page on MainlyPiano
Album Links
Amazon (referral)iTunesSpotifyYouTube
This site contains affiliate links to products. We may receive a commission for purchases made through these links.
Standard Incident (single)
Eric Shen
2019 / 1437775 Records DK
4 minutes
Review by Kathy Parsons
“Standard Incident” is the first single release from jazz guitarist Eric Shen. Smooth and evocative, Shen’s original composition also features Nolan Shaheed on trumpet. The ensemble becomes a quartet with stand-up bass and percussion. Shaheed has appeared on an impressive group of artists’ recordings that include Miles Davis, Dizzy Gillespie, Marvin Gaye and Stevie Wonder.
Eric Shen moved from Taipei, Taiwan to Los Angeles in 2016 when he received two scholarships to attend Musicians Institute in Hollywood. He was a jazz and blues house band guitarist at Sappho Jazz Club in Taipei, where he played with musicians from all over the world. Before his move to the US, Shen recorded blues guitar for a Chinese television show, “Rich House Poor House,” in 2016. He currently has an active jazz trio and is part of the Big Band Swing Express in Los Angeles.

“Standard Incident” begins with a gentle intro for guitar, light percussion and bass. A little past the one-minute mark, the trumpet enters to complete the quartet. Primarily a duet for guitar and horn with a slow, easy swing, the interplay between the two main instruments creates a wistful and dreamy dialog. “Standard Incident” is a very promising first release from Eric Shen! It is available to download on Amazon and iTunes as well as for streaming on Spotify. Check it out!
September 20, 2019
This review has been tagged as:
Debut AlbumsJazzKathy's PicksSingle Release
Eric's Artist Page on MainlyPiano
Album Links
Amazon (referral)iTunesSpotifyYouTube
This site contains affiliate links to products. We may receive a commission for purchases made through these links.