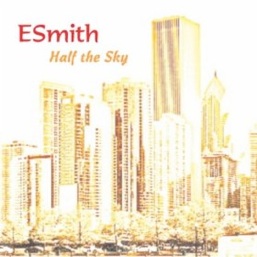 Esmith's Website Esmith's Artist Page on MainlyPiano
Album Links
Amazon (referral)iTunes
This site contains affiliate links to products. We may receive a commission for purchases made through these links.
Half the Sky
ESmith
2013 / Eric Smith
42 minutes
Review by Kathy Parsons
Half the Sky is the debut solo piano album from pianist/composer ESmith, also known as Eric J. Smith. Based in Washington State after growing up in the Rocky Mountains of Colorado, the music on this album was inspired by ESmith’s time living in the Pacific Northwest. The ten original tracks are melodic, relaxing, and invite the listener to slow down and appreciate the beauties in life. While ESmith’s compositions are not flashy or overly challenging, they are complex enough to be engaging whether in the background or listening with full attention. ESmith calls the album “the proper soundtrack for your favorite moments.” Along with the natural beauty of the PNW, his music channels some of the energy of the bigger cities of the region - Seattle Portland, Vancouver, and Bellevue - which is quite different from big cities elsewhere. On a few of the tracks, ESmith makes use of some of the effects available on a digital piano - reverb adjustments, occasional instrumentation, etc. - to express his musical vision.

Half the Sky begins with “Compass & Cards,” a piece with a strong sense of movement mixed with a bit of mystery - an intriguing opening that draws your interest and makes you want to hear more. “Cape Flattery” has a beautiful slowly flowing pace that soothes and relaxes as it paints a misty image of the northwestern-most point of the contiguous United States. “The Last of Its Kind” has a haunting, bittersweet flavor that is both reflective and dream-like - a favorite. I also really like “Those Silhouettes,” which picks up the energy level a bit and adds some digital accompaniment to the piano for atmosphere and color. “Painted Daylight” has the gentle sway of a slow dance and the soothing touch of a neck rub after a hard day. “A Short Walk To Me” is another favorite - relaxed, graceful and lyrical. “Picture Perfect Picture” makes me think of watching a sunset on the Oregon Coast or moonlight dancing on the peaceful surf - a massage for the mind. “Sleeping In F Sharp Minor” makes use of the digital aspect of the piano by enhancing the reverb to create a floating, otherworldly feeling of open space and dreaminess - a cozy ending to an impressive album!

ESmith is off to a very promising start! Half the Sky is available from Amazon, iTunes, and CD Baby. Recommended music for relaxation!

August 27, 2013
This review has been tagged as:
Debut Albums
Esmith's Website Esmith's Artist Page on MainlyPiano
Album Links
Amazon (referral)iTunes
This site contains affiliate links to products. We may receive a commission for purchases made through these links.