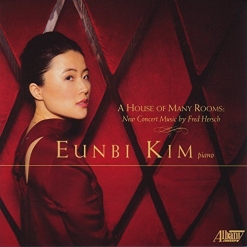 Eunbi's Website Eunbi's Artist Page on MainlyPiano
Album Links
Amazon (referral)iTunes
This site contains affiliate links to products. We may receive a commission for purchases made through these links.
A House of Many Rooms
Eunbi Kim
2017 / Albany Records
45 minutes
Review by Kathy Parsons
A House of Many Rooms is the debut recording by piano virtuoso Eunbi Kim, a genre-defying, interdisciplinary artist who has performed in venues across the United States. The album is sub-titled New Concert Music by Fred Hersch, which surprised me at first since I’ve always known Hersch as a jazz pianist and composer. Several of the eight compositions were recorded for the first time for this album, and Fred Hersch co-produced. Hersch calls this music “classical,” but prefers the term “concert music.” Many different styles of music are reflected in these pieces while remaining true to classical form, and Eunbi Kim has the skill, heart, and technique to master them all. Sometimes big, bold and even a little chaotic, to melodic and graceful, to light and playful, this is a very impressive debut! Ms Kim has been playing the piano since she was six and received her Masters in Piano Performance from the Manhattan School of Music. Hersch started playing the piano at the age of four and began composing at eight. He has been at the forefront of contemporary music for more than three decades and has recorded more than forty albums. In addition to countless other awards and fellowships, Hersch has received ten Grammy nominations.

A House of Many Rooms begins with “Variations on a Theme by Tchaikovsky,” a fascinating almost twenty-minute work that is based on a theme from the second movement of Tchaikovsky’s 4th Symphony. Most of these variations are quite short and come in a wide variety of shapes and sizes. This is the first recording of this work, which also gave rise to the title of the album when Hersch coached Kim by telling her to imagine each variation as room completely different from the other rooms.

The “Three Character Studies” were Hersch’s first concert compositions for solo piano. “Nocturne for the Left Hand Alone” is a lyrical piece with a slower, graceful flow. “Little Spinning Song” is an exercise in the rotation of the hands - an intense one-minute workout! My favorite is “Chorinbo,” a piece inspired by Hersch’s cat, Spike. Totally delightful, Kim imbues it with the perfect amount of humor and playfulness.

“Prelude #1,” dedicated to Eunbi Kim, started out as a jazz piece, but Hersch felt it seemed just right without further embellishment. I wholeheartedly agree! Slow, spare, and melancholy, I really like this one, too!

“Tango Bittersweet” is a duet for piano and violin and features Yoon Kwon. It also began as a jazz piece, inspired by people Hersch knew who had died from AIDS in the early years of the epidemic. Passionate, dramatic and very beautiful, there is also a version of the piece for cello and piano.

The soulful and heartfelt “Valentine” is a piece Hersch often plays as a solo encore. Another favorite, the gentle tenderness expressed goes right to the heart. Kim’s touch is exquisite.

This is the first recording of “Little Midnight Nocturne,” which was inspired by Thelonius Monk’s “Round Midnight.” What a wonderful closing to this magnificent album! And what a wonderful introduction for me to this side of Fred Hersch’s music and the jaw-dropping performance by Eunbi Kim!

A House of Many Rooms is amazing on so many levels and I look forward to more music from both of these incredible artists! The album is available from https://www.eunbikimmusic.com/shop, Amazon and iTunes. Very highly recommended!
December 3, 2017
This review has been tagged as:
Debut AlbumsJazzKathy's PicksModern Classical
Eunbi's Website Eunbi's Artist Page on MainlyPiano
Album Links
Amazon (referral)iTunes
This site contains affiliate links to products. We may receive a commission for purchases made through these links.