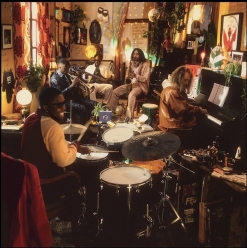 Ezra Collective's Website Ezra Collective's Artist Page on MainlyPiano
Album Links
Amazon (referral)Apple/iTunesSpotify
This site contains affiliate links to products. We may receive a commission for purchases made through these links.
Where I'm Meant To Be
Ezra Collective
2022 / Partisan Records
68 minutes
Review by Steve Yip
Ezra Collective is an interesting London-based jazz quintet composed of drummer and bandleader Femi Koleoso, bassist TJ Koleoso, keyboardist Joe Armon-Jones, trumpeter Ife Ogunjobi, and tenor saxophonist James Mollison.  And this band has a broad, diverse repertoire of music captured in their 2022 album, Where I’m Meant To Be.  In one selection we hear announced, “...everybody will think that I'm gonna be playing jazz like Americans. No! I'm playing jazz my way.”

Since my review of Shabaka Hutchin’s work, I’ve discovered many references to a burgeoning jazz scene centered in London in which he was associated with.  And Ezra Collective is part of this cohort that I have found.  As someone trying to get unstuck from the old school, and also cognizant that there is a need to break free of American exceptionalism (and chauvinism), I make it a point to catch NPR’s Tiny Desk Concerts on YouTube.com. This is an excellent way to discover new artists and new music.  That led me to get introduced to Ezra Collective.

Ezra Collective has been around for five years at least.  From this one album, it seems that their musical toolbox is eclectic and mixed, which may be a redundant description.  Speaking from an old school perspective, they do have a jazz bottomline, but one will hear Afrobeat, Latin, reggae, soul and hip hop influences and intersections in their numbers.

My best picks from this album will be found In “Victory Dance”, which is definitely a strongly Latin influenced tune with its piano providing the rhythm before the pianist Joseph Armon-Jones breaks into a solo presentation with the trumpet and saxophone also doing their very competent thing.  The other tune would be “Welcome To My World,” with the trumpet out front and the pianist doing a twinkling along with the rhythm section.  This tune comes with a reminder of the afrobeat feeding the background.  “In Life Goes On,” it starts with a Shabaka Hutchins feel with its punctuating horns, and with some Fela coming in the background.

In this album are featured other solo artists and singers whom I have no previous understanding or knowledge of; but their presence begs further learning on this UK jazz music scene and their co-collaborators.  These artists included Zambian singer Sampa the Great, singer-songwriter Emeli Sandé, “wonky funk” performer Nao, and rapper Kojey Radical.

A couple words about the keyboardist.  Watching this charismatic performer on Tiny Desk was a trip as he not just moved from one range of styles to another, and watching the absolute joy reflected in his bounce as he worked the keys.  I shared the hyperlink to this particular Tiny Desk video with another jazz enthusiast who responded about the keyboardist, “His energy got me exploring...”

There are 14 cuts in this album inclusive of two spoken pieces capturing brief commentary on “good vibes and swinging music”.  All in all, the album is a hefty 68 minutes long and worth checking out for this fresh variation of sounds and attitudes from the UK.  As band leader Femi Koeoso asserts, “We make jazz music but mix it with everything else...”

January 13, 2023
This review has been tagged as:
JazzLatest Reviews
Ezra Collective's Website Ezra Collective's Artist Page on MainlyPiano
Album Links
Amazon (referral)Apple/iTunesSpotify
This site contains affiliate links to products. We may receive a commission for purchases made through these links.