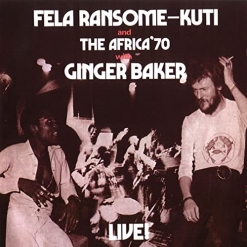 Fela's Website Fela's Artist Page on MainlyPiano
Album Links
Amazon (vinyl)Amazon (CD, MP3, streaming)Apple/iTunesSpotify
This site contains affiliate links to products. We may receive a commission for purchases made through these links.
Fela Kuti & Africa 70 Live! with Ginger Baker
Fela Kuti
2021 / Knitting Factory Records
70 minutes
Review by Steve Yip
Live! is a healthy musical ambassador of Afrobeat, the genre introduced by Fela Kuti. It captures an urgency with the fat sounds of Fela’s horn section, relentless bass lines, and Fela’s call and response vocals. Providing driving beats and featured are Ginger Baker’s collaborative drumming with Tony Allen, a renowned drummer in Fela’s Africa 70 band. Fela was a multi-instrumentalist, so I assume he is playing his sax and doing the keyboards. It is one of my favorite Fela Kuti albums, with a vibrancy that punctuates and showcases the multi-rhythms of Afrobeat. Fela had produced many, many albums in his career, and in this live album Ginger Baker figures prominently and playing along with Fela’s drummer Tony Allen.

As I have read, Baker had an early collaboration with Fela when Fela was studying at the Trinity School of Music in London, and everything after that is history. I am not sure where this live album was recorded, likely in Nigeria, as Baker had traveled to chill out in there after a rigorous run with Cream, Blind Faith, and Air Force.

In my early introduction to Fela’s music, this album’s music was first shared with me by way of second-hand audio cassettes back in the early ’80s. It’s a great thing that we now have bonafide recordings of the album available.

In most of the musical selections, Fela makes opening comments before each of the pieces in this album.
Let's Start opens the album, and as Fela says, “Let’s start with what we have come into the room to do!”
Black Man’s Cry is a musical and guttural salvo of Fela’s emerging political energy into Nigerian politics.
Ye Ye De Smell is a critique of those who know better doing the wrong thing. Fela says in the intro that he wrote this sound especially for Ginger!
Egbe Mi O (Carry Me I Want to Die) closes the original album, and I’m not sure what the title of this song means. But it’s a blast with horns in call-and-response with Fela’s vocals. The rhythm guitar reminds me of a lot of James Brown's riffs.

All the musical numbers are gems -- rigorous and invigoring and compelling music. Unlike many of Fela’s pieces which are fairly long pieces with musical preludes before vocals come in. I believe this album was recorded and released in 1971, and in a 1978 re-issue, an added bonus of 24-minute dual-drum solos by Ginger Baker and Tony Allen is featured.

From the FelaKuti.com website: “The 50th-anniversary reissue of Live! is pressed on double red vinyl and features an etching of the album artwork on Side D. Side C features Ginger Baker and Tony Allen’s blinding, extended, dual-drums solos from 1978’s Berlin Jazz Festival, re-mastered at Abbey Road Studios in 2021.”

January 28, 2022
This review has been tagged as:
Jazz
Fela's Website Fela's Artist Page on MainlyPiano
Album Links
Amazon (vinyl)Amazon (CD, MP3, streaming)Apple/iTunesSpotify
This site contains affiliate links to products. We may receive a commission for purchases made through these links.