Fiona's Website Fiona's Artist Page on MainlyPiano
Album Links
Amazon (referral)iTunes
This site contains affiliate links to products. We may receive a commission for purchases made through these links.
Story of Ghosts
Fiona Joy Hawkins
2018 / Blue Coast Records
42 minutes
Review by Kathy Parsons
Story of Ghosts is the third solo piano album from Fiona Joy (aka Fiona Joy Hawkins), but she has released many more albums than three (I’ve reviewed eleven solo albums, her first album with super-group FLOW, and three compilations). Like her previous two releases, Story of Ghosts is available as an “audiophile edition” CD and a high resolution download. All ten tracks on the album are original, and a few are updated solo piano versions of previous releases. The music on this album is introspective and reflects on the past year of Fiona’s life. A classically-trained pianist from Australia, Fiona says of Story of Ghosts: “It’s much more classical and very connected to my roots.” An exceptionally expressive pianist, Fiona always brings deep emotion to her music, connecting with her listeners in a very personal way. On this album, she plays a Steinway piano built in 1885 at Blue Coast Studios, and the album was produced by Cookie Marenco. Not surprisingly, the piano sound is impeccable.

Story of Ghosts begins with “Song for Dunnie” and was composed in memory of Annette (Dunnie) Crossley. More celebratory than mournful, it is obviously a tribute to someone whose life was well-lived and gives the album an energetic start. Much of “Story of Angels” is played in the upper notes of the piano with a free-flowing rhythm and a mysterious tone. “Contemplating” has appeared on at least a couple of Fiona’s previous albums and I like this solo piano arrangement the best. “Blue Dream” has also been on other releases, but I think this is the first solo piano version and it’s a beauty. “The Solo Tango” was released as “Tango On Wednesday” on 600 Years in a Moment (2013). Sensuous and moody, the emotions expressed are palpable. “The White Light” starts out slowly, gradually building momentum and energy. Mostly a repeated pattern on each hand, it’s something of a “call and response” for piano that slows down and fades out at the end. On the title track, Fiona makes great use of the dampers to create a haunting, mysterious effect. She also utilizes the smooth-on-one-hand-and-percussive-on-the-other technique that she does so well! On “Twilight,” she has a softly rolling left hand that suggests the grayness of the sky at twilight and a more open, percussive right that suggests stars starting to come out and sparkle. I’d love to know the story behind “Story of Insanity,” but my guess would be that it wasn’t a fun experience. The music seems to express despair, anger and confusion - very dark and dramatic! “Before the Light” is much softer and more spacious at the beginning, and then a variation on the theme becomes livelier and more energetic before gradually winding back down to bring the album to a close.

Story of Ghosts is both beautiful and a great demonstration of Fiona Joy’s expressive playing. It is available from Amazon and iTunes. Recommended!

August 27, 2018
This review has been tagged as:
Kathy's Favorites: 2018Kathy's Picks
Fiona's Website Fiona's Artist Page on MainlyPiano
Album Links
Amazon (referral)iTunes
This site contains affiliate links to products. We may receive a commission for purchases made through these links.
More reviews of Fiona Joy Hawkins albums 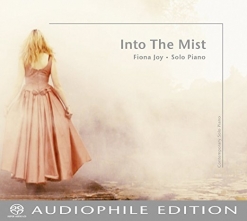