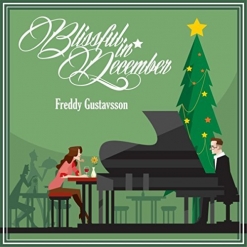 Freddy's Website Freddy's Artist Page on MainlyPiano
Album Links
Amazon (CD)Amazon (download)iTunes
This site contains affiliate links to products. We may receive a commission for purchases made through these links.
Blissful in December
Freddy Gustavsson
2017 / Freddy Gustavsson
17 minutes
Review by Kathy Parsons
Blissful in December is a collection of seven original instrumental pieces inspired by the spirit of the holidays. It is also the debut album (EP) from Swedish pianist/composer Freddy Gustavsson. All of the songs are piano-based and include (keyboard) flute and strings arranged by Ioana Amarita. Gustavsson’s ambition is to create music that is pleasant to the ear and that brings feelings of joy and hope. A few of these pieces go as far back as fifteen years and all of them reflect on themes such as friendship, anticipation and love. It is the heartfelt warmth and sincerity that really carries this music - not a lot of flash and bravado. This is a perfect album for sipping some hot cocoa or a glass of red wine in front of a cozy fire. Actually, since these pieces are originals, you can listen to this album any time of year without feeling silly!

Freddy Gustavsson started taking classes at the public music school at the age of 10. He had always been fascinated with devices with lots of keys and buttons to press, so the piano was a natural choice. Once his parents realized that he was serious about his piano lessons, they gave him his own keyboard for Christmas. In addition to practicing his lessons, young Freddy started composing his own little songs. In his early 20’s, Gustavsson moved to Hamburg, Germany for his first full-time job as a web developer. One of the first items he moved into his new apartment was a Yamaha digital piano, a “loyal and valued companion” ever since.

Blissful in December begins with “Advent Wishes,” a gentle piece with a warm and comforting melody played on the piano with strings and flute accompanying. “Born in September” has an almost hymn-like quality with its positive expression and soothing lilt - a favorite! “Waiting For Santa” is light and playful while conveying a touching poignance and sense of innocence. “Smiling Hearts” expresses the warm glow of deep happiness when it feels like joy is pouring out of every cell of your body. Wouldn’t it be great to feel like that all of the time? “Found: Best Friend” exudes the warmth and contentment of finding a kindred soul who appreciates you for who you really are. The flute carries most of the graceful melody in “A Candle Bright,” the longest piece of the group at just over three minutes - very peaceful and calming. The title track is the last one on the album. Warm, gentle and very tender, it feels much like a lingering hug from a dear friend or relative - or a nice big mug of hot chocolate on a chilly afternoon! Either one works for me!

Freddy Gustavsson is off to a great start with his debut album and I’m looking forward to more music from him in the near-future. The album is available from Amazon, iTunes and CD Baby. Check it out!
December 8, 2017
This review has been tagged as:
Debut AlbumsHoliday AlbumsHoliday Albums: 2017
Freddy's Website Freddy's Artist Page on MainlyPiano
Album Links
Amazon (CD)Amazon (download)iTunes
This site contains affiliate links to products. We may receive a commission for purchases made through these links.
More reviews of Freddy Gustavsson albums 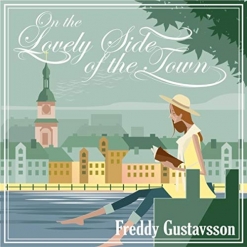