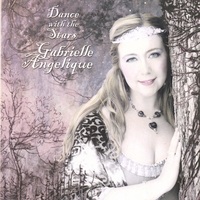 Gabrielle's Website Gabrielle's Artist Page on MainlyPiano
Album Links
Amazon (referral)iTunes
This site contains affiliate links to products. We may receive a commission for purchases made through these links.
Dance with the Stars
Gabrielle Angelique
2006 / Fairy Tale Records
62 minutes
Review by Kathy Parsons
I have to admit that when I received Dance with the Stars for review, I was a bit skeptical. Celtic music was done to death a few years ago, so I was happily shocked to be completely blown away by Gabrielle Angelique’s incredible voice and amazing story songs. Since I started listening to this CD about a week ago, I’ve become completely hooked, and have found myself driving around with the volume cranked up as loud as I could stand it. Wow! Angelique’s voice is the focus on this CD, as it should be, and she also plays the accompanying harp and keyboards. The background instrumentation is perfect in its simplicity - ambient keyboard washes, harp, and the occasional rhythm track to set the soul to dancing. Several of the songs are fairy tales that charm with their innocence and purity, but others are darker and more painfully emotional. The tales are fascinating - mermaids, fairies, Wuthering Heights, lost love, found love, a bonny boat - and all of the lyrics are included in the beautifully illustrated booklet that accompanies the CD. Some of the songs are original, some are traditional Celtic songs, and some are cover tunes, yet the whole album is a cohesive package. I hate to gush, but this CD has really captured my imagination!

The title track opens the CD with a feeling of mystery. One of the darker melodies, the words and Angelique’s sweet voice immediately draw you in and prepare you for the journey into days of old and fairylands where anything is possible. One of the surprises is “Wild Horses” by Mick Jagger and Keith Richards. What a gorgeous melody, and Angelique puts heart and soul into it. I like everything on this album, but my favorite track is “Fairy Realm.” The driving beat is infectious, as is the sound of the fairies laughing as they dance and play with innocence and abandon. The singer is the holder of the key to the realm, but she obviously has knowledge of the outside world where wars rage and blood is spilled. None of that exists in the Fairy Realm. Great song! I also really like “Wuthering Heights,” which was written by Kate Bush, but Angelique makes it her own. Passion and desperation run through the song, and yet Cathy’s voice is clear and strong in knowing what she wants. “A Mermaid She Was” is the delightful tale of a mermaid who has lived on the land for awhile and pleads with the ocean to let her come home again. “Anachie Gordon” is the tragic love story of a young woman forced by her parents to marry a rich man while in love with another. A traditional Scottish song, Angelique infuses it with defiance and loss as her heart breaks for her beloved Anachie. The CD closes with a poignant ballad by Enya, “May It Be.”

What a knockout of an album! Dance with the Stars is available from gabrielleangelique.com, cdbaby.com, and amazon.com. Very highly recommended!

August 31, 2006
This review has been tagged as:
Kathy's Favorites: 2006Kathy's Top 40 for the Decade (2000-2009)
Gabrielle's Website Gabrielle's Artist Page on MainlyPiano
Album Links
Amazon (referral)iTunes
This site contains affiliate links to products. We may receive a commission for purchases made through these links.