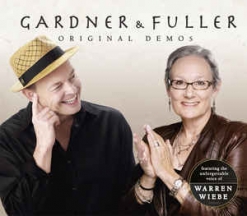 Gardner & Fuller's Website Gardner & Fuller's Artist Page on MainlyPiano
Album Links
Cecily Gardner's SiteScott Fuller's SiteContante & Sonate
This site contains affiliate links to products. We may receive a commission for purchases made through these links.
Original Demos
Gardner & Fuller
2016 / Contante y Sonante
53 minutes
Review by Michael Debbage
Back in 2009 a small intimate independent label Contante & Sonante based out of Madrid managed to pull off releasing Fly Away which was not just a tribute to David Foster but frankly it set the standard of how a tribute album should be done. Prior to that the first Original Demos theme featured Grammy nominee Steve Dorff and apparently the time is nigh to revisit this format via the rather unheard of Gardner & Fuller. Needless to say the magic continues with this duo not only featuring their musical compositions and voice but also that of the late great Warren Wiebe.

The duo comes in the form of singer, songwriter and voice teacher Cecily Gardner accompanied by Scott Fuller, keyboardist/arranger and songwriter, a 35-year veteran in the music industry who has worked with the likes of Chris Camozzi and artist/producer Narada Michael Walden. Apparently a fire was lit back in 1990 at a Santa Monica music seminar they attended that featured David Foster and his newly discovered voice Warren Wiebe. It was here that Scott was given an opportunity to perform “Through The Fire” on stage with Warren. Needless to say this pivotal moment has clearly influenced Original Demos.

On first listen the most obvious choices are the bookends of this fine album where Warren Wiebe is prominently featured courtesy of the glorious mid tempo toe tapper opener “17 Years”. This magical moment is equaled by the more reflective exquisite closer “This Blue Tattoo”. While Wiebe’s warm emotive voice takes the spotlight what should not be forgotten is that “17 Years” is composed by Scott Fuller while “This Blue Tattoo” is co-composed by Cecily Gardner. Both very Foster flavored, it was very clear that this musical duo were paying very close attention when attending that seminar way back in 1990.

However, Original Demos is not for Wiebe fans only as in between the above mentioned bookends are some wonderful composition chapters of passionate music. Frankly the Gardner/Fuller composition “Move On” is an expressive blend of Gardner’s Karen Carpenter influenced vocals that are in complete sync with Fuller’s gorgeous keyboard work. David Foster fans will eat this one up. Similar results can be found on the reflective “Home”. Meanwhile the balance of the album is filled with enjoyable stylistic West Coast music including the toe tappers “Slip Away” and “Get Lucky”.

While the latest project from Contante & Sonante are demo level recordings much in the production vernacular of the Stephen Dorff featured Original Demos the production by no means is of dodgy demo status. Clearly Gardner & Fuller are passionate about their musical abilities from their compositions to arrangements to performance. And courtesy of the specialty label Contante & Sonante we get a limited edition opportunity to this musical love fest.


May 29, 2017
This review has been tagged as:
Michael's Picks
Gardner & Fuller's Website Gardner & Fuller's Artist Page on MainlyPiano
Album Links
Cecily Gardner's SiteScott Fuller's SiteContante & Sonate
This site contains affiliate links to products. We may receive a commission for purchases made through these links.