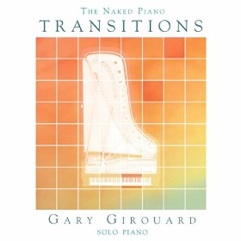 Gary's Website Gary's Artist Page on MainlyPiano
Album Links
"Transitions" BackstoryAmazon (referral)iTunes
This site contains affiliate links to products. We may receive a commission for purchases made through these links.
The Naked Piano: Transitions
Gary Girouard
2016 / Galileo Music
58 minutes
Review by Kathy Parsons
Transitions is the sixth volume in pianist/composer Gary Girouard’s The Naked Piano series, and what a masterpiece it is! In fact, it will be very difficult to beat this one for “Album of the Year” status on MainlyPiano.com. Girouard has always poured his heart and soul into his music, but there is something incredibly special about this album. The music tells the story of Apollo and Lady Maria, a young couple who lived in Italy in the late 15th century. He was the son of a poor peasant family and she was of noble birth. The tragedy of these star-crossed lovers sets in motion a series of “transitions” that inspire the music. This beautiful story will be available on Girouard’s website and is included as a booklet with the physical CDs sold on his site. The physical CD also has liner notes that explain the personal meaning of each piece. It’s a very elegant and emotional creation, but the music, oh, the music! All fifteen of the pieces are solo piano except a fully-orchestrated version of “Invictus,” which also appears as a piano solo; both versions are highlights of this stellar album. The physical CD has two bonus tracks that are not included in the back-story but that fit in with the rest of the music beautifully.

Transitions begins with “Solitude,” inspired by the idea that everything worthwhile starts with moments of solitude. The piece opens quietly and introspectively, gradually building in intensity and then quieting again. “Redemption” gives a musical voice to guilt and forgiveness - especially self-forgiveness and acceptance. The solo version of “Invictus” comes from deep within Girouard’s soul and was inspired by the poem that gave us the quote: “I am the master of my fate, the captain of my soul.” Strength, passion, and determination pour from each note. “Beyond Tomorrow” is another favorite as it looks deep within, accepting sadness and the power of time to heal even the most painful hurts. “Serenity” expresses a perfect calm and peacefulness - gorgeous! “Transformation” overflows with deep emotion, expressing the challenges of each stage of life as well as the constant changes we all experience - dark, poignant and profoundly moving. “Nebula” is a mysterious and haunting improvisation. The title track uses several related motifs to illustrate development and change over time. Gently encouraging and reassuring, it’s a lovely conclusion to the backstory. The orchestrated version of “Invictus” is the first orchestral piece Girouard has released publicly. Arranged and orchestrated by Doug Hammer, it’s easy to imagine this wonderful piece behind the credits to the film version of the backstory (we can hope!)! The two bonus tracks are “Chronos” and “Taken.” “Chronos” looks at the passage of time and “Taken” was inspired by the tragedy of Sandy Hook.

Gary Girouard has been one of my favorite artists for quite a few years, but I still wasn’t prepared for the beauty and emotional impact of The Naked Piano: Transitions. I give it my highest recommendation. It is available from nakedpiano.com, Amazon, iTunes, and CD Baby. Go get it!
January 30, 2016
This review has been tagged as:
Kathy's Favorites: 2016Kathy's Picks
Gary's Website Gary's Artist Page on MainlyPiano
Album Links
"Transitions" BackstoryAmazon (referral)iTunes
This site contains affiliate links to products. We may receive a commission for purchases made through these links.
More reviews of Gary Girouard albums 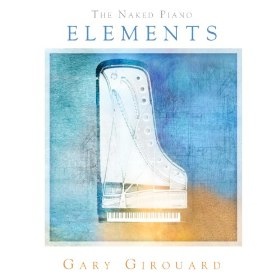