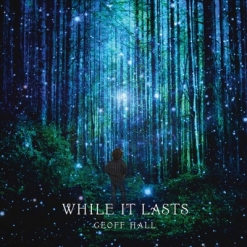 Geoff's Website Geoff's Artist Page on MainlyPiano
Album Links
iTunes
This site contains affiliate links to products. We may receive a commission for purchases made through these links.
While It Lasts
Geoff Hall
2019 / Hall Studios
36 minutes
Review by Kathy Parsons
While It Lasts is the follow-up to Geoff Hall’s 2016 debut, Understanding the Signs, which was nominated for Zone Music Reporter’s “Album of the Year,” “Best New Artist,” and “Best Electronic Album” awards. The nine original tracks on While It Lasts focus on Hall playing finger-style acoustic guitar backed by strings and/or light orchestration. Warmly optimistic and gently soothing, this is great music for relaxation, driving, quiet activities, and just generally getting lost in. Most of Hall’s pieces have fairly non-specific titles, allowing each listener to decide what the music “means.” Hall used a variety of guitars for the recording, finding the best tonal quality for each piece. A graduate of the Berklee School of Music with a degree in Orchestration and Film Scoring, Hall’s music is visual and often tells a story (without words).

While It Lasts begins with “Arrival,” a gentle piece for guitar and strings that expresses a sense of anticipation and of looking forward. “Something On the Wind” is a bit darker and very evocative. Oboe is one of the instruments in the “orchestra” and seems to give the piece a slightly mysterious tone. The guitar is always front and center, but the oboe provides a very interesting counterpoint. “Resolved” begins rather intensely with guitar and strings intertwining and dancing around each other before coming to a “resolved” end - very clever! “Solitary Alignment” is a sweetly poignant guitar and violin duet - very uncluttered and open, contrasting the smoothly-bowed violin and sparkling acoustic guitar. “Lifted” is lighter than air with guitar and keyboard in a lively dance that expresses joy and positivity. “Remembering” returns to guitar and strings with a simple melody that seems to tell the story of an event or series of events that is being remembered and savored all over again. “Pheidippides” is the most cinematic of the tracks. Named for the Greek figure that inspired marathon races, strength and energy pour from every note. More fully-orchestrated than the other tracks, the guitar maintains its place at the forefront of the piece. The title track is another lovely guitar and violin duet that contrasts the smoothly bowed strings of the violin with the plucked strings of the guitar. With the opening track titled “Arrival,” perhaps it is only fitting to close with “Departure.” Although it is far from dark or despairing, it doesn’t seem quite as upbeat as the first track. Again, it is up to the listener to decide on the story each piece is telling.

While It Lasts is a wonderful accompaniment to many of life’s quieter moments and is available from iTunes and CD Baby as well as many streaming sites.
July 1, 2019
This review has been tagged as:
Guitar musicKathy's Picks
Geoff's Website Geoff's Artist Page on MainlyPiano
Album Links
iTunes
This site contains affiliate links to products. We may receive a commission for purchases made through these links.