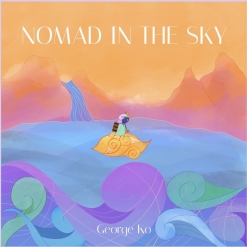 George's Website George's Artist Page on MainlyPiano
Album Links
Amazon (referral)Apple/iTunesSpotify
This site contains affiliate links to products. We may receive a commission for purchases made through these links.
Nomad in the Sky EP
George Ko
2022 / SENSE
7 minutes
Review by Kathy Parsons
Nomad in the Sky is a solo piano EP by Young Steinway Artist George Ko. It consists of four original improvisations inspired by George's favorite animé and TV shows that embody the hero's journey. Quoting George Ko:

"I wanted to create a piano suite that encapsulates the mysticism, awe, and vivaciousness of an epic voyage. I imagined my mascot, the astronaut pianist, as a samurai flying through the skies on a magical cloud, accompanying him on his many trials to victory."

The four pieces on the EP were improvised and recorded in one take. The album was self-produced and George also engineered the recording and created the cover artwork. Again quoting George Ko:

"I'm a huge fan of Moebius. In the spirit of his use of gradient colors, dream-like fantasies, and suggestive simplicity, I drew the album art for Nomad in the Sky. I imagined a completely natural landscape. However, all the elements of nature were very fanciful, including their colors, shapes, and movement."

Intrigued yet? The music is amazing! I have to admit to being a bit skeptical until I started listening to the album itself. Now I'm a big fan and am really looking forward to hearing more of George Ko's music! There are plenty of good and even great pianists out there, but this guy is incredible! AND he's blazing his own trials and doing his music career HIS way.

George Ko developed his composing artistry at Harvard University, graduating with honors and a Bachelor's degree in music. He's gone on to winning many prestigious awards and performing all over the world. He improvises all of the music in his concerts and never performs the music the same way twice. He is also an active film composer.

Okay, back to "Nomad in the Sky"! The four pieces in the suite are each roughly two minutes, but what images and sensations they create! They also provide a dazzling example of George Ko's playing technique and performing wizardry. I've reviewed some incredible music the past couple of years, but this EP is very, very high on my "wow!" list! It begins with "Avatar," which was also released as a single. The piece is how George imagined the theme song for the live-action version of "The Last Airbender" would sound. Flowing yet bright, lively and heroic, it's a most impressive start! The title track ponders the transitional parts of a hero's journey when there are moments of nostalgia, reverie and reflection. "Imagine a wandering samurai floating around on a cloud." Sometimes light and carefree and sometimes more pensive, it's amazing how much expressive storytelling is contained in less than two minutes! "Dance of the Fire God" was inspired by "Demon Slayer" and captures the sparkling beauty of fire and the power it brings to those who wield it. Lightning-fast runs on the piano and a lyrical melody line again bring vivid images and ignite the imagination. "Space Cowboy" is the theme for a gun-slinging outlaw doing his best to survive. Playful and a little bit funky, it's sure to bring a smile!

What an amazing adventure George Ko takes us on in 7 1/2 minutes! Hearing is believing, so be sure to check this one out at Amazon, Apple Music, and many streaming sites including Spotify. I give Nomad in the Sky EP my highest recommendation!

November 11, 2022
This review has been tagged as:
Latest Reviews
George's Website George's Artist Page on MainlyPiano
Album Links
Amazon (referral)Apple/iTunesSpotify
This site contains affiliate links to products. We may receive a commission for purchases made through these links.