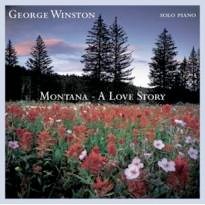 George's Website George's Artist Page on MainlyPiano
Album Links
Amazon
This site contains affiliate links to products. We may receive a commission for purchases made through these links.
Montana - A Love Story
George Winston
2004 / Windham Hill
54 minutes
Review by Kathy Parsons
Montana - A Love Story is George Winston’s tribute to his home state, and contains an eclectic grouping of piano solos coming from a variety of sources. The only real surprise on the album is that only five of the seventeen pieces are Winston’s original compositions, but I doubt that his fans will be disappointed. From the beginning, Winston has called himself a “folk pianist” rather than “new age,” and quite a few of the tracks are folk or traditional songs that Winston arranged as piano solos. Winston has again included a piece by fellow native-Montanan Philip Aaberg, a pianist Winston greatly admires and respects (who doesn’t???). Most of the pieces are melodic and graceful, with the possible exception of Frank Zappa’s “The Little House I Used to Live In,” which is more discordant and abstract - can’t say that I like that one much. Winston mentions in his liner notes that he is playing a lot of solo piano dances, and he includes some of his favorite pieces from those as well. Several of the tracks have a strong Asian-influence - an interesting development.

My favorites in this collection are pretty varied. “Thumbelina” comes from Mark Isham’s soundtrack for the classic children’s story. Gentle and quiet, this is a lovely opening. I really like “Billy In the Low Land,” which is a variation on an American fiddle tune. It is easy to picture Montana’s vast open spaces and to feel the peace and contentment of a simpler country life. “Valse Frontenac” is a traditional waltz from Quebec, and is a sweet and sincere piece full of charm and simple elegance. I prefer Philip Aaberg’s recording of “Nevertheless, Hello,” but Winston does this great piece justice. “The Twisting of The Hay Rope” is a joyful ancient Irish piece with a beautiful melody. “You Send Me,” a slow-dance arrangement of the Sam Cooke classic, works well as a piano solo. “The Mountain Winds Call Your Name” is one of the originals, and much of it is played on plucked piano strings - a technique Winston has relished for a long time; it’s an interesting piece. My favorite track is “Music Box” by Rentaro Taki, a haunting little piece with a bittersweet melody. I also really like Winston’s arrangement of “Goodnight Irene,” an easy-going waltz composed by Huddie Ledbetter (Leadbelly) in the early 20th century. The final two tracks are loving tributes to two of Winston’s cats, both very tender and sweet, and full of Winston’s distinctive open spaces.

George Winston has truly become a legend in his own time, and has had a strong influence on many pianists and other musicians. Montana - A Love Story is a continuation of his tradition of gathering pieces from a wide variety of sources and making them his own. Winston’s many fans will love this album! It is available from amazon.com and many retail music outlets.
November 1, 2004
George's Website George's Artist Page on MainlyPiano
Album Links
Amazon
This site contains affiliate links to products. We may receive a commission for purchases made through these links.
More reviews of George Winston albums 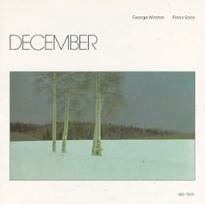 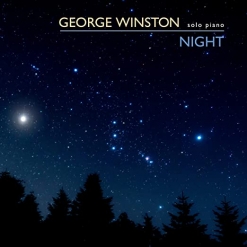