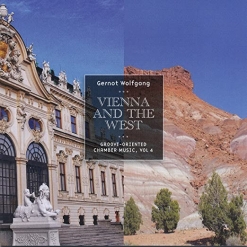 Gernot's Website Gernot's Artist Page on MainlyPiano
Album Links
Amazon (referral)iTunesSpotify
This site contains affiliate links to products. We may receive a commission for purchases made through these links.
Vienna and the West
Gernot Wolfgang
2019 / Albany Records
69 minutes
Review by Kathy Parsons
Subtitled “Groove-Oriented Chamber Music, Vol. 4,” Vienna and the West is part of a series of albums by composer Gernot Wolfgang that includes Common Ground (2006), Short Stories (2011) and Grammy-nominated Passing Through (2016). This album is the first of Wolfgang’s music that I’ve heard, so I can’t compare it to his previous recordings, but I love that he has created a hybrid genre of sorts that combines modern classical elements with jazz and other styles of music to form a musical language all his own. The eight original compositions on the album are performed on a variety of instruments that include piano, bassoon, strings, clarinet and horn. Overall, I would say that the music is more classical than jazz, but that “groove” element sneaks in quite often, adding an element of fun as well as getting the toes tapping. All of the featured artists contributed stellar performances!

Born in Austria, Gernot Wolfgang is a graduate of the USC program, “Scoring for Motion Pictures and TV” and has earned degrees from Berklee College of Music in Boston and the University of Music in Graz, Austria. In addition to many commissioned works and his own projects, Wolfgang is an orchestrator in the film and TV industry and a guitarist with the Austrian jazz ensemble, The QuARTet. He is also a lecturer and writer and has received a very impressive list of awards for his music.

Vienna and the West begins with “Road Signs,” a piece for bassoon (Judith Farmer) and piano (Nic Gerpe). “Inspired” by navigating LA traffic and all that it entails - quick-thinking, frustration, moments to reflect, etc. - there is a wide variety of musical themes in this piece! “Passage To Vienna” is based on the concept of a roundtrip voyage from present-day America to Vienna in the early 1900’s. The piece features Tereza Stanislav on violin, Ben Hong on cello and Joanne Pearce Martin on piano. Merging jazz themes with material rooted in the works of turn-of-the-century Viennese composers such as Schoenberg, Berg and Webern seems unlikely, but it’s a fascinating piece. “Route 33” is the only piano solo on the album and is performed by Gloria Cheng, who also commissioned the work. The six themes of the piece are a mix of dreams and segments of a road-trip, each flowing from one to the next. “Windows,” a trio for clarinet (Edgar David Lopez), bassoon (Farmer) and piano (Nadia Shpachenko), is based on the idea of the listener walking down a hallway lined with windows, periodically catching a view of the exterior. “The outside world remains the same, but the perspective of the viewer/listener changes from window to window…a series of parallax views.” (quoted from the liner notes) The almost fourteen-minute piece covers a lot of musical territory, from very spare and quiet to lively and energetic.

“Impressions” is a three-movement work for clarinet (Lopez), bassoon (Farmer), horn (Amy Jo Rhine) and string quartet (Stanislav on violin, Robert Brophy on viola, Andrew Shulman on cello and Steve Dress on double bass). As the title suggests, the music was inspired by impressions more than actual experiences. The first movement, “Carnival in Venice,” is often light-hearted and playful, but there is also a darker side. “Dream” is much more fluid and somewhat “otherworldly.” “Country Road” is a lively and joyful “imagined car ride in the American West.”

“From Vienna With Love” is a piano quartet featuring pianist Robert Thies (winner of the Gold Medal at the 1995 International Prokofiev Competition), Maia Jaspar White (violin), Brophy (viola) and Charles Tyler (cello), and is based on a sketch for an intended second movement for Gustav Mahler’s Piano quartet from 1876.

Vienna and the West is a fascinating and very enjoyable musical exploration for adventurous listeners looking for music that’s different and very substantial. It is available from Amazon, iTunes/Apple Music and various streaming sites such as Spotify.
July 28, 2020
This review has been tagged as:
ClassicalJazzModern Classical
Contributing artists:
Robert Thies
Gernot's Website Gernot's Artist Page on MainlyPiano
Album Links
Amazon (referral)iTunesSpotify
This site contains affiliate links to products. We may receive a commission for purchases made through these links.