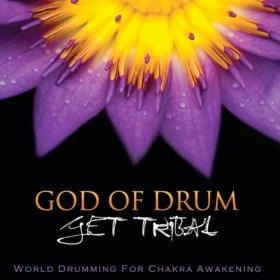 Get Tribal's Website Get Tribal's Artist Page on MainlyPiano
Album Links
Amazon (referral)iTunes
This site contains affiliate links to products. We may receive a commission for purchases made through these links.
God of Drum
Get Tribal
2013 / Kismetech
34 minutes
Review by Kathy Parsons
God of Drum is a collection of ten original tribal music pieces inspired by the thunder deities of world mythology. The music was composed and performed by Get Tribal, the artist name of Kari Hohne, who is also a Mayan language preserver, master diver, best-selling author, tablet app designer, dream analyst, business consultant, Tai-Chi instructor, and world traveler - whew!

Ancient cultures revered thunder for activating spring each year and used drums to synchronize the heart, mind and soul with the vital life force. It is believed that the pounding of the drum awakens the heart, allowing us to achieve higher states of awareness. The ten tracks on this album are designed to stimulate the seven major Chakras as well as the Dantien, the Soul Star and Spirit Chakras, and the compositions reflect world-wide cultural influences that include Native American, Gaelic, Chinese, Norse, Celtic, African, Middle Eastern, Mayan, and Indian. It’s an impressive and stirring album from a world music perspective as well as from a more earthy and sensual enjoyment of the pounding rhythms.

God of Drum begins with “Call of Abundance,” inspired by Wakinyan, the Thunder Bird of the Lakota and one of the many feathered serpents found in indigenous cultures. This piece is mostly drums and chant, with flutes and electronic effects floating a melody over the drum. I love the intensity and energy of “Passion Rising,” composed for Loucetious, a Gaelic deity. The powerful drums, chanting voices, and bagpipe-like sounds stimulate the sacral chakra, which can separate fear and anger from the sensation of pleasure. “Donnar” the Nordic thunder deity, inspired “Awakening Power,” which is very dark, intense and cinematic. Powerful, hypnotic drumming meshes with wordless vocals, strings and organ to get the pulse pounding and the heart racing - another favorite. “The Flow of Expression” is quite different. Inspired by Xango from the Afro-Caribbean region, the piece has a Reggae beat and a chant intended to “polish the mirror of the mind.” “Open to Wonder” is a haunting and exotic nod to Adad, the storm deity of Mesopotamia. The subtle changes in rhythm are designed to be unexpected in order to make us more receptive to a sense of wonder. “Aligning With Purpose,” inspired by the Mayan thunder deity, Chaac, is more orchestrated and cinematic. It is intended to stimulate the Soul Star chakra, which regulates our connection to a sense of purpose and helps us assimilate the wisdom of the higher self or purveyor of dreams. “Endless Reflection,” inspired by Indra, the thunder deity of India, contains a mantra that is sung throughout the peace, repeating the words, “om” (the sound of the universe) and “shanti,” which means peace. The combination of traditional Indian instruments and electronics creates a fascinating juxtaposition that brings the album to a peaceful close.

God of Drum is a mesmerizing musical exploration of thunder gods throughout history and from all corners of the world. Certain to stir the ears and soul as well as the chakras, Get Tribal has created a unique and inspiring work of musical art (I love the cover artwork, too!). It is available from Amazon, iTunes and CD Baby. Recommended!
October 23, 2013
Get Tribal's Website Get Tribal's Artist Page on MainlyPiano
Album Links
Amazon (referral)iTunes
This site contains affiliate links to products. We may receive a commission for purchases made through these links.
More reviews of Get Tribal albums 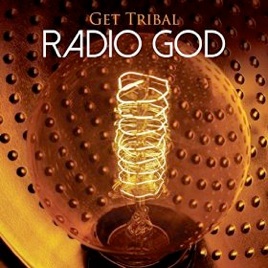