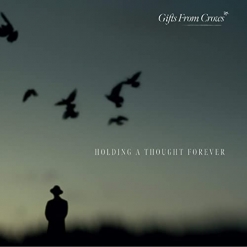 Gifts From Crows' Artist Page on MainlyPiano
Album Links
Amazon (referral)Apple/iTunesSpotifyYouTube videos
This site contains affiliate links to products. We may receive a commission for purchases made through these links.
Holding a Thought Forever
Gifts From Crows
2021 / 2289029 Records DK
39 minutes
Review by Kathy Parsons
Holding a Thought Forever is the debut album from Gifts From Crows, a British one-man piano ensemble that is Richard Laurence. As is true of so many works of art, there is much more to the story of this album than meets the eye (or ear). In a nutshell, it is a piano-based neo-classical music project, but knowing more of the story takes us much closer to the heart of the music. The story begins with the 140-year-old upright piano that was passed from generation to generation in Richard's family and stood in their front room as Richard grew up. Richard composed music constantly from the time he was in his mid-teens until life got in the way as an adult. The family piano found its way back to Richard a few years ago and gradually, music started to flow again.

Sadly, the most significant part of the story was the untimely death of Richard's younger brother, Damien, in 2018. In trying to cope with grief, Richard chose music to help him find peace and to restore a sense of balance. The loss of his brother also caused Richard to slow down and reflect on what was really important to him, and composing music returned with a "fierce urgency" that resulted in this album. Somewhat ironically, the coronavirus lockdowns provided the time needed to make the project happen. Richard recorded the music with piano and sample libraries, finding that "getting the sound out of your head and into a format that you can share with others is truly liberating."

I think Richard Laurence sums up the album best: "So Holding a Thought Forever was born out of a personal loss and into a world of shared loss, uncertainty and a general sense that life is increasingly precarious. As the world continues to struggle with the impact of the coronavirus, I hope that in some small way people can find solace in the album, be uplifted by these pieces and ultimately know that hope is the only road out of these dark times."

Holding a Thought Forever begins with "As Nature Returns," a piece Richard composed one month into the coronavirus lockdown. As spring returned to Europe, many people noticed things in nature they hadn't really seen since childhood. Many also realized that once mankind is gone, nature will reclaim the cities. Piano and strings give the piece a gentle and quietly haunting message of hope. "Something Thought Lost Is Found" is an expression of gratitude for the return of playing and composing music. Subtle but very effective orchestration supports the lovely piano melody. There are two versions of "Remembering Who and What We Are." Both are piano with orchestration, but the second version is about twenty seconds longer. There are also two versions of "But When You Sleep" - one with orchestration and one that is solo piano. Dark and dream-like, the gently rocking rhythm makes it something of a lullaby. "You Can't Get There From Here" is a little different with a more electronic treatment that includes a "deep wobble bass and a delayed kick drum providing the other-worldly foundation upon which the track is built." "No Place In This World (Elegy)" addresses the concept of "home" and what that means for all living things. The video for this track has some amazing nature photography, so be sure to check it out!

It seems that far too often, it takes a tragedy or crisis to inspire art, but the world can be touched and become a better place because of that art - if people will look or listen. Holding a Thought Forever is available from Amazon, Apple Music/iTunes and many streaming sites. There is also a set of eight beautifully creative music videos on YouTube, so be sure to check those out, too!

March 28, 2021
This review has been tagged as:
Debut AlbumsLatest Reviews
Gifts From Crows' Artist Page on MainlyPiano
Album Links
Amazon (referral)Apple/iTunesSpotifyYouTube videos
This site contains affiliate links to products. We may receive a commission for purchases made through these links.