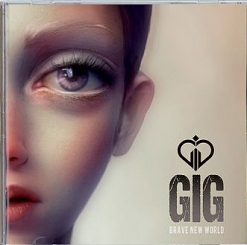 GIG's Artist Page on MainlyPiano
Brave New World
GIG
2018 / Contante & Sonante
48 minutes
Review by Michael Debbage
Once again the little label from Spain Contante & Sonante has orchestrated another brilliant move by managing to bring Randy Goodrum, Dave Innis and Bruce Gaitsch together as a band aptly titled the acronym GIG. Pooling their songwriting talents along with Goodrum’s vocal and lyrical capabilities meshed with Dave Innis’ subtle piano work and harmonic vocals only to add the sublime guitar work of Bruce Gaitsch represent our passports into a Brave New World.

GIG band members have been associated with top musicians such as Steve Perry, Chicago, Peter Cetera, Richard Marx and Restless Heart which is a plethora of world class artists and bands. Needless to say there are elements of these artists that weave themselves into the DNA of GIG. Willing to put their reputations and musical egos aside GIG have managed to host a heavenly 48 minutes of astronomical acetate recording that will leave you hoping and praying this is not a one off event.

To pick any preferred moments from this eleven track recording would be a tremendous challenge. That said it does not hurt to start off with the delightful “Private O’Toole” where all the elements of GIG are on display from lyrical content along with Innis piano merging with Gaitsch restrained guitar work. Framed with harmonic vocals to die for, the song is about as subtle and sexy as a luscious lady’s long closely shaved legs with beautiful lines, tone and absolutely no edges.

A Brave New World is full of recording wonders that includes the even more reflective “Peddler, Pete” which is in somewhat contrast to the lightly rhythmic island sway of “Isle Of Pigs”. Contrary to the title it pays homage to the gorgeous peaceful island of Exuma that sits gently in the turquoise blue crystal clear oceans of the Bahamas. Needless to say Gaitsch and Innis’ guitar piano interplay is gorgeous with George Hawkins Jr adding to the exotic element courtesy of his restrained but magical fretless bass work. GIG only manage to top that moment with the egoless move of closing the album out with “All I Ever Need” that features the golden vocals of the wonderful late Warren Wiebe.

Not all super groups are successful in harnessing their talents and producing a cohesive recording that would reflect the pooling of the aptitudes involved. But this delightful debut recording that hits the streets on April 30th 2018, is all about the music and not the egos. One can only hope that this is not a one off event and that GIG will be willing to continue to live in this Brave New World and that their spectacular super smooth debut album will lead to other recordings.