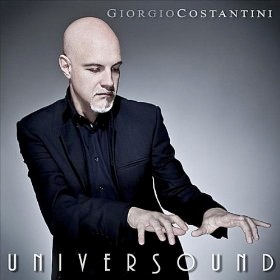 Giorgio's Website Giorgio's Artist Page on MainlyPiano
Album Links
Amazon (referral)iTunes
This site contains affiliate links to products. We may receive a commission for purchases made through these links.
Universound
Giorgio Costantini
2011 / Giorgio Costantini
43 minutes
Review by Kathy Parsons
What a delight it is to start 2011 with my first CD review of the year qualifying as a “Pick”! Italian multi-instrumentalist Giorgio Costantini has released his second CD of original piano-based music, and it is an absolute beauty! Costantini’s 2006 PianoPianoForte was a favorite for that year, and Universound is of the same stellar quality. A multi-faceted composer, Costantini has written and produced music for films and television as well as for other artists. The thirteen tracks on Universound are made up of seven piano solos and six orchestrated pieces, some of which have a big cinematic sweep. Whether he is playing an intimate piano solo or a majestic orchestral work, the powerful emotions conveyed are clearly identifiable and ring true with nothing forced or overly-sentimental. Melodic, passionate, and haunting are words I would use to describe this album, and then I would give it my highest recommendation.

Universound opens with “Alba Mundi” (The Dawn of the World), which begins with a lovely piano solo and then becomes more orchestrated and rhythmic. This is a great piece to start with because it demonstrates Costantini’s sensitive piano touch and then expands into a more sweeping soundtrack. It reaches a peak and then ends abruptly. Exciting! “Life” is a gracefully flowing piano solo that leaves no doubt that Costantini is a master of his chosen instrument. “Stardust” begins as a piano solo that evolves into a gently rhythmic piece with strings and percussion. Love it! “Perdutamente” (Deeply/Madly) is one of my favorites. A piano solo that becomes orchestrated as it develops, it comes from the depths of a passionate heart. “The Emperor” is one of the “big” pieces with full orchestration, choir, and piano. Almost explosive in its grandeur, it also has delicate, stirring passages - a great piece! “A Mon Frere” (Dedicated to my brother), is another favorite. A tender piano solo that expresses a very special kind of love, it’s an emotional powerhouse. “Diaro di un Giorno Perfetto” (Diary of a Perfect Day) is a light and carefree solo that dances for joy. “Oceano” is breathtaking in its haunting beauty. A slow and almost mournful solo, it expresses deep longing and a sense of loss. As someone who becomes completely mesmerized watching jellyfish, I really appreciate “Jellyfish Ballet” and its gracefully undulating movement. “La tua presenza in ogni cosa” (Your presence in everything) closes the album with another gorgeous love song. It begins and ends as a piano solo, with passionate strings in the middle sending the melody heaven-ward, and then leaving the piano to continue speaking from the heart only to end suddenly. Gorgeous.

Universound is truly an amazing album! Do your ears and your heart a favor and check it out! It is available from Amazon, CD Baby and iTunes.
January 6, 2011
This review has been tagged as:
Kathy's Favorites: 2011
Giorgio's Website Giorgio's Artist Page on MainlyPiano
Album Links
Amazon (referral)iTunes
This site contains affiliate links to products. We may receive a commission for purchases made through these links.
More reviews of Giorgio Costantini albums 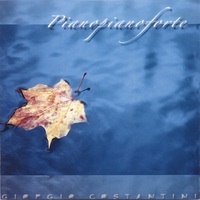