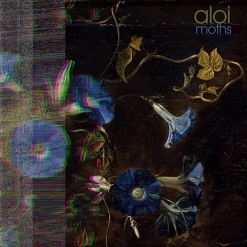 Giovanni's Website Giovanni's Artist Page on MainlyPiano Blue Spiral Records' Website Blue Spiral Records' Artist Page on MainlyPiano
Album Links
Amazon (referral)Apple/iTunesSpotifyMoths website
This site contains affiliate links to products. We may receive a commission for purchases made through these links.
Moths
Giovanni Aloi and Blue Spiral Records
2022 / Blue Spiral Records
41 minutes
Review by Kathy Parsons
Giovanni Aloi's Moths is one of the most intriguing projects I've been introduced to in quite some time. A series of neo-classical piano pieces with electronic elements, the ten original tracks were composed and recorded between 2016 and 2020. Quoting Aloi, "These tracks are sedimentations of moods and thoughts that have defined my experiences as a member of the LGBTQ+ community after moving to the United States at a time of intense political and social tension. Recurring motives, compositional circularities, and occasional bursts of light outline a journey into a dark undergrowth of mostly melancholic soundscapes." In a nutshell, Aloi's professional work focuses on the representation of nature through the arts. He has published numerous books on the subject and has curated exhibitions that explore the representation of animals and plants in the arts as well as the impact of climate change. Aloi teaches art history at colleges and universities in the US and abroad and is interested in the creative analogies that link different expressive media like painting, photography, music and writing. His musical compositions are equally informed by classical and electronic music, and "explore non-verbal communication as an opportunity to write and narrate forms of personal mythologies that make life more livable."

Quoting Aloi about Moths: "Each track is named after a species of moth that lives in places I have, at some point, called home. Compositional structures and moods are largely defined by the way these crepuscular insects fly, hover through vegetation, spiral around lights, and disappear into darkness. Working on these tracks has over time become a way to process events and impressions—an opportunity to collect and process specific moments, fragments, and memories that, like moths, would return to visit at dusk."

Moths begins with "Pterophorus pentadactyla," commonly known as the white plume moth and found in North Africa and Europe. The music is dark and more than a little mysterious, making it easy to visualize these delicate creatures flying overhead in the fading light. "Thaumetopoea processionea" or oak processionary, is also found in Europe and lives in oak forests. A spare and simple piano melody floats in and around the atmospheric electronic sounds with grace and mystery. "Leuconycta diphteroides" (green owlet) is a moth found in parts of the US and Canada. The music on this track begins with a very ambient feeling created with piano and electronics, adding cello and becoming more dramatic around the mid-point of the piece and gradually fading away. "Ascalapha odorata" is known as the black witch and normally ranges from the southern US to Brazil. It is associated with death or misfortune in the folklore of many Central American cultures. The piano part is very spare with some of it played in the deep bass of the piano. Ambient strings and atmospheric washes of dark tonal color give the piece an almost mournful feeling. "Camptogramma bilineata," also known as "yellow shell," is another European moth and its piece shimmers almost in stillness. Mysterious keyboard sounds weave in and out of the beautiful piano melody with accents in the deep bass of the piano - very sad yet magical! "Amata phegea," also known as the "nine-spotted moth," is found mostly in southern Europe. Livelier and more orchestrated than most of the pieces, it also has very delicate moments. "Lymantria dispar" is found all over the world and is listed as one of the world's 100 most invasive alien species. Also known as the gypsy moth, it can cause severe damage to deciduous and coniferous trees. The music is, again, very dark and somber, with piano and electronics woven together to express feelings of tragedy and loss.