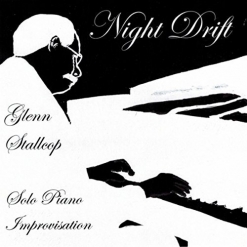 Glenn's Website Glenn's Artist Page on MainlyPiano
Album Links
Amazon (referral)iTunes
This site contains affiliate links to products. We may receive a commission for purchases made through these links.
Night Drift
Glenn Stallcop
2016 / SMS Recordings
52 minutes
Review by Kathy Parsons
Night Drift is an album of nine solo piano improvisations by Glenn Stallcop. All of the music was recorded on a single night in 2009. Stallcop generally considers himself a morning person, but he had been recording for several days and felt he was in the “zone,” so he continued to record into the night. The titles of the pieces all either have “drift” in their titles or are about something that drifts freely - in a similar fashion to the way the music was created. Stallcop says in the liner notes: “Drifting is what I feel separates my night music from my morning music. It is more willing to wander off the tracks into unfamiliar territory.”

I found Stallcop’s comments about his approach to the creation of his music enlightening: “For composition, I have always composed at the keyboard. I do not improvise as a professional performance technique; I improvise as a compositional technique. This is important because it means I do not prepare a show, develop showcase pieces, practice different styles, or rehearse with others. I enjoy improvising with others, but not as a means of ‘developing’ a program. When I improvise, I am trying to create something new rather than re-create something I did before. I don’t use improvisation in my composition as a performance technique, I use it as a creative technique. I do not use improvisation in my music; my improvisation is my music.”

Also a long-time double bassist for the Phoenix Symphony, Stallcop is a highly-regarded composer whose original works have been performed all over the country. He has fourteen published works for orchestra, thirty-three chamber music and vocal works, and multiple works for solo piano and double bass; Night Drift is his twelfth solo piano release to date. Because of the improvisatory nature of Stallcop's music, it appeals to fans of jazz as well as contemporary classical music.

Night Drift opens with “Driftwood,” a piece that “drifts” freely, not in any defined pattern of rhythm or melody, expressing the feeling of floating. “Late Night Phone Call” is more ominous in nature. Knowing how rarely good news comes in the middle of the night, this piece expresses feelings of dread and darkness, slowly building to a powerful emotional climax and then gradually calming. To again quote the liner notes, “A drifter drifts with a purpose.” The piece titled “Drifter” does just that, exploring the piano keyboard from bass to treble and back, pausing here and there to spend a little more time in some places, moving on in others. “Snowdrift” ranges from dark and powerful to very delicate and spare. “The Balloon” drifts gracefully, sometimes swept higher by wind currents, sometimes floating along at a leisurely pace until near the end when it seems to be caught in a swirling breeze, and then the piece ends abruptly - as the “lives” of balloons usually do! “The Whim” addresses “drifting concentration” and meanders as thought processes can when left to their own devices! “Drifting Off” is the last track on the album and the last track that was recorded that night. Somewhat sleepier than the other tracks, you can hear places where Stallcop was trying to resist the temptation to sleep, becoming less and less successful in that endeavor as the piece progresses. I thought maybe the piece would end with a crash as Stallcop’s head hits the piano keyboard, but the final passage is more of a dreamy surrender.

Just for the “record,” Night Drift is not intended to be sleep-inducing (except possibly “Drifting Off”) and much of it is edgy in its spontaneous creation. It is available from Amazon, iTunes, and CD Baby.
December 19, 2016
Glenn's Website Glenn's Artist Page on MainlyPiano
Album Links
Amazon (referral)iTunes
This site contains affiliate links to products. We may receive a commission for purchases made through these links.
More reviews of Glenn Stallcop albums 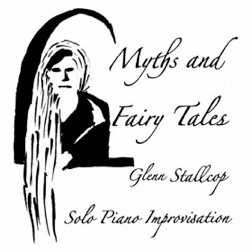