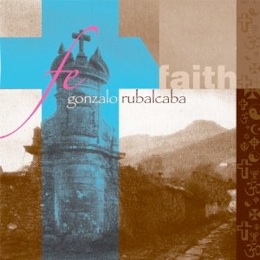 Gonzalo's Website Gonzalo's Artist Page on MainlyPiano
Album Links
Amazon (referral)iTunes
This site contains affiliate links to products. We may receive a commission for purchases made through these links.
Fe ... Faith
Gonzola Rubalcaba
2010 / 5Passion
78 minutes
Review by Kathy Parsons
Jazz pianist Gonzalo Rubalcaba has appeared as leader on more than twenty-five critically-acclaimed albums, but Fe ... Faith is his first release on his own 5Passion label. The album features fifteen piano solos that range from introspective musings to flamboyant bursts of pianistic energy. The sound quality of this impeccably-recorded album is crystal-clear without being harsh or overly bright, allowing the listener to hear all of the nuances in Rubalcaba’s playing, from the piano pyrotechnics to the subtle pedal shadings. The Cuban-born Rubalcaba received his early training in classical music, leading to his degree in music composition from Havana’s Institute of Fine Arts in 1983. He has been credited with fifteen Grammy nominations, including five for Jazz Album of the Year. He continues to tour the world as a solo pianist in jazz and classical settings as well as band leader in club and concert engagements. It is very clear from this music why Gonzalo Rubalcaba is considered by many to be one of contemporary music’s most compelling artists.

Several of the fifteen tracks have more than one version on the album, none of which are presented in consecutive order. “Derivado 1” serves as a 30-second prelude - a series of chords, the last of which are held until they fade out. “Maferefun Iya Lodde Me” has a simple, gentle rhythm that accompanies the more fluid and free-form right hand as it dances on the keyboard, maintaining a cool, meditative mood throughout. “Improvisation 1” and “2” are based on John Coltrane’s style and pay tribute to the jazz icon. “Derivado 2” is a reharmonized expansion of the first fragment that creates an other-worldly atmosphere by utilizing silence, overtones, and the piano pedals. “Con Alma 1” and “3” are versions of Dizzy Gillespie’s classic song. Both are slow, dark, and incredibly beautiful. “Blue in Green” by Miles Davis and Bill Evans also has two versions, and both are gorgeous explorations the masterpiece - dark and brooding yet passionate. For me, the highlight of the album is a suite of three pieces dedicated to each of Rubalcaba’s three children. “Joan” seems quite reflective, adding playful, innocent moments couched in a father’s love. “Joao” was composed for Rubalcaba’s son, and describes a soulful boy who perhaps alternates between melancholy and a sense of adventure. “Yolanda Anas” is the sweetest and most graceful of the three pieces. Sometimes dreamy and sometimes giggling and fun, it’s my favorite track. “Derivado 3” concludes the trilogy, fading out and bring the album to a close.

If you have an ear for jazz piano with an edge, be sure to check this one out! Fe ... Faith is available from g-rubalcaba.com, Amazon, iTunes, and CD Baby.
May 23, 2011
This review has been tagged as:
Jazz
Gonzalo's Website Gonzalo's Artist Page on MainlyPiano
Album Links
Amazon (referral)iTunes
This site contains affiliate links to products. We may receive a commission for purchases made through these links.