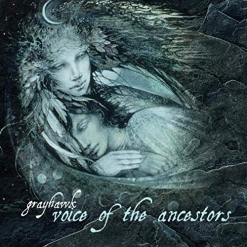 Grayhawk's Website Grayhawk's Artist Page on MainlyPiano
Album Links
Amazon (referral)iTunes
This site contains affiliate links to products. We may receive a commission for purchases made through these links.
Voice of the Ancestors
Grayhawk
2019 / Deep Space Music
48 minutes
Review by Kathy Parsons
Grayhawk’s Voice of the Ancestors is the third installment in his Shamanic Trilogy. Beginning with Shaman Journey (1992) and Blissful Magic - Spiral of the Celtic Mysteries (1995), Grayhawk concludes the trilogy with eight tracks that call for peace in a multitude of languages and cultural and musical traditions. Joined by a who’s who in the new age and world music genres, guest artists include Wouter Kellerman (flutes), Amy Shulman (concert harp), Darlene Koldenhoven (vocals), Jill Haley (oboe and English horn), Karen Olson (viola) and David Vito Gregoli (ambient guitar). Recording sessions took place internationally, contributing to the global scope of the music and creating an inclusive, all-encompassing spirit that flows throughout the album. I admit that I haven’t heard the first two albums in the series, but this one is exceptional. Grayhawk composed, orchestrated, conducted and produced the music for The Grayhawk Consort. He performed keyboard and percussion synthesizer sequencing, as well as on a variety of exotic digital instruments. Even the cover artwork by Susan Seddon Boulet is striking with its depiction of the goddess “Selene” holding a young child. The album itself is a “transmutation of grief brought on by the untimely death of [Grayhawk’s] toddler son, Christopher Rainbow Dragon, who perished from neuroblastoma, a catastrophic pediatric cancer of the sympathetic nervous system.” The album is dedicated to Cristopher Emmet Gibney “who now dwells with the ancestors.” (quoted from the liner notes of the CD.

Voice of the Ancestors begins with “Transcendent Soul,” a piece that reflects on the eleven months little Christopher fought his disease and “the contrasting grief and sense of beauty surrounding this sacred deathing experience.” Ethereal flutes, harp, and strings are both peaceful and sad. “The Banteay Srei Temple” was inspired during a visit to the Angkor Wat World Heritage site in Cambodia in 2015. Hai Phuong performs on the Dan Bau, a traditional one-string Vietnamese instrument. Wouter Kellerman recorded his flute parts in South Africa, and Amy Shulman’s harp was recorded in California, making it a piece that was recorded on three continents! Peaceful, graceful and very soothing, it’s a piece I find easy to get lost in. “Guardians of Goddess Thien Hau” also features Hai Phuong on Dan Bau and Amy Shulman on harp as well as percussion by Brad Dutz plus synth Asian erhu and percussion. Mysterious and hauntingly beautiful, there is a quiet serenity in the music. The centerpiece of the album is the three versions of “Peace Prayer.” The first is “A Capella,” which is under two minutes and is a finalist in the 2019 Peace Song Awards. The full-length version is a bit more than ten minutes and features lyrics sung in four languages. The piece was designed to be nonsectarian “to allow the listener to invoke their own personal higher power, faith and beliefs.” Darlene Koldenhoven and Randy Crenshaw sing the English lyrics, Ofir Engel sings the Hebrew and Arabic sections, and Bahman Mojallal sings the Farsi. I’d love to see this peace become a world anthem for peace and understanding! A shortened version of the piece was created to work with more broadcasting platforms and closes the album.

Voice of the Ancestors could - and probably should - become a classic in the new age/world genres. It is available from Amazon, iTunes and CD Baby as well as the various streaming outlets.

February 27, 2019
This review has been tagged as:
Kathy's Picks
Grayhawk's Website Grayhawk's Artist Page on MainlyPiano
Album Links
Amazon (referral)iTunes
This site contains affiliate links to products. We may receive a commission for purchases made through these links.